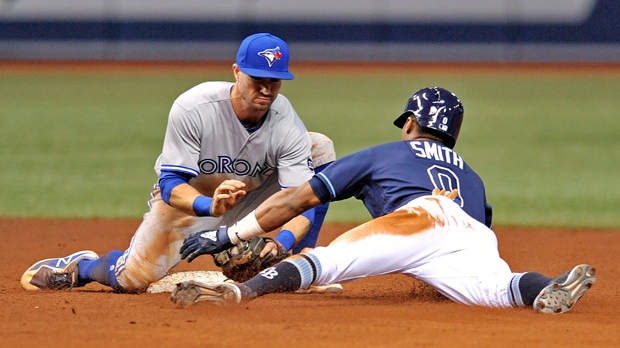 Toronto Blue Jays shortstop Richard Urena tags out Tampa Bay Rays' Mallex Smith at second base during the seventh inning of a baseball game Saturday, Sept. 29, 2018, in St. Petersburg, Fla. Smith hit an RBI-single and was thrown out by left fielder Teoscar Hernandez as he tried for the extra base. (AP Photo/Steve Nesius)

He was trying to become the first pitcher to win 10 straight starts within a season since Justin Verlander with Detroit in 2011.

Diego Castillo (4-2) got the win with two innings of relief. Sergio Romo pitched the ninth for his 25th save despite giving up a pinch-hit homer to Reese McGuire.

Cron's 30th homer got the Tampa Bay on the board in the second against Toronto starter Ryan Borucki (4-6), and Meadows put the Rays ahead for the first time with another homer off Borucki in the seventh.

It was the sixth homer of the season and the first as a Ray for Meadows, who was acquired along with pitcher Tyler Glasnow in the July 31 trade that sent pitcher Chris Archer to Pittsburgh.

Jon Berti led off the game with an infield single, stole second and scored the run off Snell on Rowdy Tellez's sacrifice fly.

With Snell out of the game, Teoscar Hernandez hit his 22nd home run off reliever Castillo to put the Blue Jays up 2-1.

Tommy Pham led off the Tampa Bay sixth with a single, extending to 31 his streak of games in which he has reached base safely, the longest active streak in the majors. He scored on Brandon Lowe's two-out single, tying it at 2 in the sixth.

Borucki gave up four runs on seven hits in 6 2/3 innings.

The Blue Jays struck out 18 times.

Blue Jays manager John Gibbons has decided to let 35-year-old catcher Russell Martin manage the team in Sunday's regular-season finale. “I'm having a little fun with it,” Gibbons said. “Let him see how tough it is.”

Martin hasn't played since Sept. 3 because Toronto is looking at younger catchers.

The team announced Wednesday that Gibbons will not return as manager next season.

Blue Jays: RHP Marco Estrada, bothered by lower back soreness, will not make his final scheduled start Sunday. “We talked about it,” Estrada said. “Obviously, I've been feeling some stuff, so they kind of figured what's the point. Done enough, let's just rest now.” Estrada, 7-14 with a 5.64 ERA in 28 starts in what could be his last year with Toronto, becomes a free agent after the season.

RHP Sam Gaviglio (3-9) will make his 24th start for the Blue Jays, his fourth against the Rays, in Sunday's season finale. The Rays will finish with a “bullpen day,” starting with RHP Ryne Stanek (2-3) or RHP Diego Castillo (3-2).