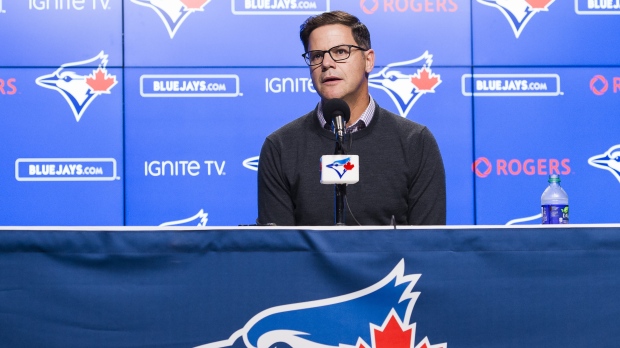 Ross Atkins, general manager of the Toronto Blue Jays, speaks to the media during the end-of-the-season press conference in Toronto on Tuesday, October 1, 2019. Atkins says pitching remains one of his top priorities for the off-season. THE CANADIAN PRESS/Nathan Denette

TORONTO - The Toronto Blue Jays can boast about a young core with plenty of potential. The next step for general manager Ross Atkins is surrounding those players with some reliable starting pitchers.

Atkins plans to be aggressive over the coming days and weeks and said Wednesday that free agency and/or trade options will be explored.

“We're definitely more focused on pitching right now to just keep as much possible flexibility there just based on need,” he said. “But it doesn't mean that our next acquisition after a Chase Anderson would be a pitcher. It may be a position player.

“We've been aggressive on position players too and trying to acquire them. We'll remain there. It just depends on (how things are) lining up.”

Anderson was 8-4 with a 4.21 ERA in 27 starts and five relief appearances for Milwaukee last season. The Blue Jays exercised the option year of his deal at US$8.5 million.

After Anderson, question marks remain. Atkins will try to provide some answers with off-season movement picking up ahead of next week's winter meetings in San Diego.

“We'll just continue what we've been doing to understand every opportunity across the entire market,” Atkins said. “The top of it, the middle of it and beyond that. So there's not a free agent pitcher that we haven't touched base with.

“We have been aggressively trying to understand every opportunity. We'll continue to do that and there remains to be opportunities out there.”

As Atkins met with members of the Toronto chapter of the Baseball Writers' Association of America at a downtown restaurant, reports surfaced that right-hander Zack Wheeler had agreed to a five-year deal worth $118 million with the Philadelphia Phillies.

Also Wednesday, the Atlanta Braves agreed to a one-year deal with veteran lefty Cole Hamels. Dominoes are starting to fall.

If the season were to start tomorrow, Matt Shoemaker, Ryan Borucki and Trent Thornton would probably be considered for spots No. 2 through No. 4 - provided all are healthy.

T.J. Zeuch, Anthony Kay, Thomas Pannone and others could be in the mix at the back of the rotation, with stud prospect Nate Pearson on deck in the minors.

The Blue Jays gave their rookies a chance to play during a challenging 67-95 season in 2019. Several veterans were shipped out and the youngsters got their shot.

The team hopes that a nucleus of Bo Bichette, Cavan Biggio, Lourdes Gurriel Jr., and Vladimir Guerrero Jr., can build off that campaign, which showed promise at times but also included growing pains.

Atkins felt the clubhouse started to come together over the last couple months of the season. He added that positive environment helped lead to better results on the field over that stretch.

“We're expecting that just to continue to get better and better,” he said.

Also Wednesday, Gurriel was named the team's player of the year and most improved player for 2019. Ken Giles was named pitcher of the year, Bichette took the rookie of the year honour and Justin Smoak earned the John Cerutti Award for goodwill, co-operation and character.

Voting was conducted by the BBWAA's Toronto chapter.