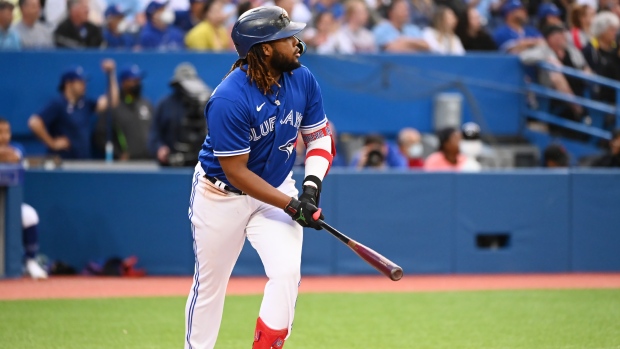 TORONTO - George Springer, Vladimir Guerrero Jr., and Matt Chapman homered to power the Toronto Blue Jays to a 7-2 victory over the Boston Red Sox on Monday night at Rogers Centre.

The game kicked off an eight-game homestand for the Blue Jays against American League East division foes. Toronto (41-32) moved a half-game behind the second-place Red Sox (42-32), who have dropped just three of their last 14 games.

The Blue Jays will play a rare five-game series later this week - including a Saturday doubleheader - against the Tampa Bay Rays, who are a half-game behind Toronto in the standings.

Springer drew a leadoff walk in the first inning and scored on a Bichette double. The ball curled into foul territory down the left-field line and took an unusual bounce off the wall padding, allowing Springer to score without a throw.

Gausman (6-6), who had lost his last three decisions, retired the first eight batters in order before allowing a seeing-eye single to Bobby Dalbec.

Springer hit a solo shot in the third inning for his 14th homer of the season. Bichette singled and Guerrero followed with his team-leading 18th homer, which had a game-high exit velocity of 108.2 miles per hour.

Chapman's blast was his 11th homer of the season. Seabold (0-1) allowed seven earned runs, nine hits and a walk over 4 2/3 innings while striking out seven.

The Red Sox had no answer for Gausman, who allowed four hits and two walks. Boston managed just one extra-base hit, a fluke double by Rafael Devers in the sixth inning that caromed off the side of second base before bouncing into left field.

The right-hander, who earned his first win since May 31, capped his appearance by fanning Dalbec for his 10th strikeout.

David Phelps threw a clean eighth inning and Shaun Anderson gave up two runs in the ninth before getting Rob Refsnyder to fly out with two runners on to end it.

Announced attendance was 25,498 and the game took two hours 59 minutes to play.

Before the game, the Blue Jays optioned right-hander Jeremy Beasley to Triple-A Buffalo and selected Anderson to the major-league roster.

Anderson was 2-1 with a 3.91 earned-run average over 14 appearances for the Bisons this season. The Blue Jays also transferred left-hander Hyun Jin Ryu (elbow) to the 60-day injured list.

Both teams have right-handed starters lined up for the rest of the series. Ross Stripling (4-2, 3.08) is tabbed for Tuesday night against Boston's Michael Wacha (6-1, 2.34).