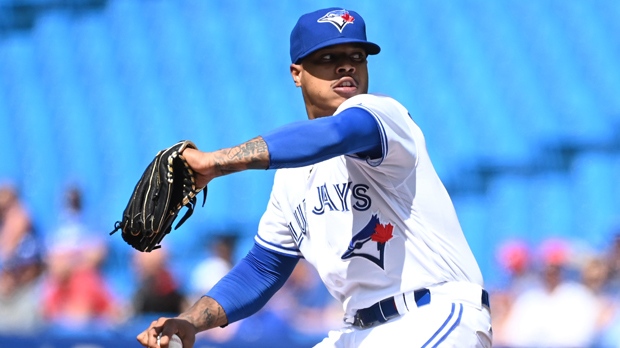 Stroman was scheduled to start for the Blue Jays against the visiting Boston Red Sox on Thursday night but Toronto manager Charlie Montoyo announced before the game that the ace of his pitching staff was day to day.

“If he's not 100 per cent we're not going to pitch him,” said Montoyo. “There's a chance he might not pitch until after the all-star break. But if he's fine, he'll pitch.”

Stroman is the Blue Jays' lone player in Tuesday's all-star game. The all-star break begins on Monday and the Blue Jays don't play again until July 12 in New York against the Yankees.

“He needs to throw a bullpen session, lets it go, and then if he's fine, he can start,” said Montoyo of Stroman, who left Toronto's 7-6 loss to the Kansas City Royals on Sunday in the fifth inning when a cramp prevented him from continuing his start.

Stroman, who was not available to speak with media on Thursday, has been undergoing treatment on the injury. Although it's his non-throwing shoulder, the concern is that he'll develop an injury on the other side of his body as he tries to compensate for the pain.

Montoyo went with an “opener,” against Boston on Thursday, with reliever Derek Law pitching the first inning followed by Thomas Pannone.

Regardless of Stroman's condition, Aaron Sanchez will still make his scheduled start against the Baltimore Orioles on Friday.

If Stroman can assure Montoyo and Toronto's medical staff that his shoulder is fine he could start over the weekend against Baltimore. If he is not good to go, Clayton Richard will take the mound for Toronto on Saturday and Trent Thornton will go for the Blue Jays on Sunday.