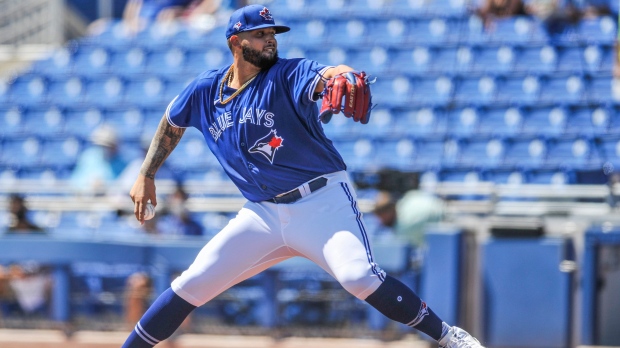 FILE - In this March 14, 2021, file photo, Toronto Blue Jays pitcher Alek Manoah throws to a New York Yankees batter during the first inning of a spring training baseball game in Dunedin, Fla. Manoah, a 23-year-old prospect, is being called up by the Blue Jays to make his major league debut against the New York Yankees on Wednesday night, May 26. (Steve Nesius/The Canadian Press via AP, File)

NEW YORK - The Toronto Blue Jays selected pitcher Alek Manoah to the active roster ahead of his start against the New York Yankees on Thursday afternoon.

Manoah, a six-foot-six 260-pound right-hander, is one of the team's top prospects.

Drafted 11th overall in 2019, he posted a 0.50 earned-run average with 27 strikeouts and three walks over three starts with triple-A Buffalo.

Manoah's big-league debut will come in the opener of a doubleheader at Yankee Stadium. He was originally scheduled to pitch Wednesday night but the game was postponed due to weather.

“His energy today is as good as it was yesterday,” Blue Jays manager Charlie Montoyo said in a pre-game video call with reporters. “He's very confident. That's what I really like about him.”

Robbie Ray was scheduled to start the nightcap for the Blue Jays against fellow southpaw Jordan Montgomery.

This report by The Canadian Press was first published May 27, 2021.