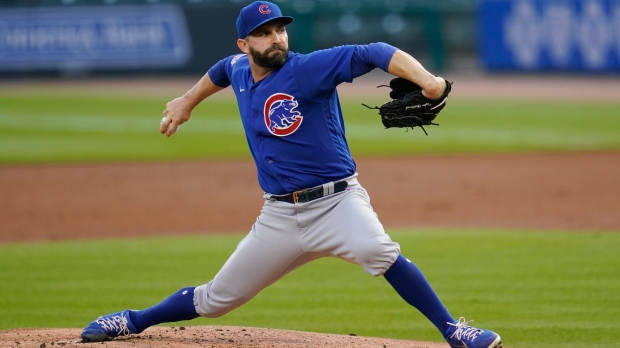 The move, which had been reported earlier this week, adds another arm to the Blue Jays' pitching staff along with 2019 MLB saves leader Kirby Yates, who signed a one-year deal with Toronto on Wednesday.

The moves are part of a busy off-season for Toronto that includes an agreement with star outfielder George Springer on a six-year contract worth a reported $150 million, pending a physical.

The 31-year-old Chatwood started five games for the Chicago Cubs in 2020, going 2-2 with a 5.30 ERA with 25 strikeouts in 18 1/3 innings before getting derailed with various injuries, including a right forearm strain that shut him down for the second half of the season.

Chatwood, from Redlands, Calif., is 51-57 with a 4.40 ERA over nine seasons split between Los Angeles Angels, Colorado Rockies and Cubs.

He made his debut with the Angels as a 21-year-old in 2011 before getting traded to the Rockies at the end of his only season with the club that drafted him.

Chatwood spent the next five seasons in Colorado, before signing a three-year, $38-million deal with Chicago in 2017.

Chatwood, who has been a starter for the majority of his career but has served as a reliever when needed, missed most of 2014 and all of 2015 following Tommy John surgery.

This report by The Canadian Press was first published January 21, 2021.