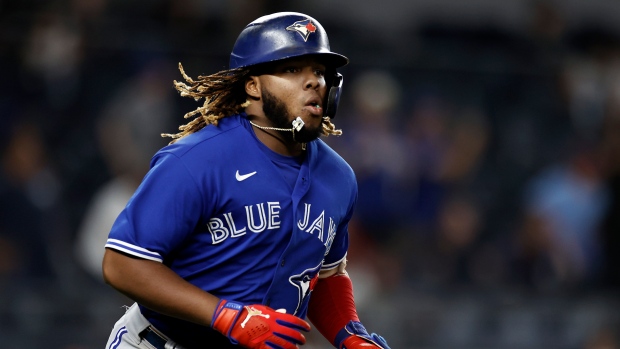 Toronto Blue Jays' Vladimir Guerrero Jr. runs up the first base line after hitting a home run against the New York Yankees during the ninth inning of a baseball game on Wednesday, Sept. 8, 2021, in New York. The Blue Jays won 6-3. (AP Photo/Adam Hunger)

Toronto Blue Jays slugger Vladimir Guerrero Jr., was named the winner of the Tip O'Neill Award on Tuesday as Canadian baseball player of the year.

The award, presented by the Canadian Baseball Hall of Fame and Museum, goes to the Canadian player judged to have excelled in individual achievement and team contribution while adhering to baseball's highest ideals.

Guerrero, a Montreal native, finished tied for the big-league lead with 48 home runs last season. He drove in 111 runs and finished with a .311 average and 1.002 OPS (on-base plus slugging).

“I'm honoured to receive this award,” Guerrero said in a release. “It's an honour to be honoured in the country I was born in. Thank you to the Canadian Baseball Hall of Fame. I hope to win this award again in the future.”

The Tip O'Neill Award is named after James (Tip) O'Neill, a Woodstock, Ont., native who was one of baseball's first legitimate stars.

Jamie Romak, who played in South Korea last year, won the award in 2020.