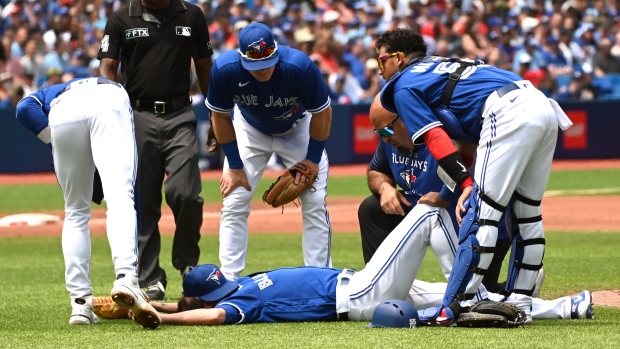 Toronto Blue Jays' Kevin Gausman, centre, is checked on after being hit by a batted ball off the bat of a Tampa Bay Rays batter in second inning American League baseball action in Toronto, Saturday, July 2, 2022. Gausman would leave the game. THE CANADIAN PRESS/Jon Blacker

The 31-year-old was helped off the field after suffering a right-ankle contusion when he was hit by a comebacker in the Jays' 6-2 loss to the Tampa Bay Rays in first game of a doubleheader.

Toronto manager Charlie Montoyo said X-rays of Gausman's ankle came back negative and the team would see how he felt Sunday.

“Just like everybody else, I was hoping that it wasn't anything worse than a contusion,” said Montoyo. “That's what had happened and that's good news.”

Tampa shortstop Wander Franco hit a comebacker to Gausman in the second inning, with the ball bouncing off the turf and into the pitcher's right ankle.

Gausman tried to make a play, but instead fell to his stomach. Toronto catcher Gabriel Moreno completed the play and threw Diaz out at first, with his battery mate in distress nearby.

Trainers attended to Gausman and helped him off the field as the inning ended.

Rays starter Shane McClanahan earned the win, striking out 10 and allowing just two runs over seven innings of work. He said after the game he and his teammates were concerned for Gausman and pleased to hear that his X-rays came back negative.

“That's a great thing to see,” said McClanahan. “I was asking about him all through the game, how he was doing. That's the best of a bad situation.

“We all care for that guy and we're praying and hoping for the best.”

Gausman struck out three and gave up four hits in two scoreless innings before the injury.

Right-hander Casey Lawrence, who had been called up from triple-A Buffalo as Toronto's 27th player for the doubleheader, took over pitching duties in the third inning. He pitched 5 2/3 innings of relief, allowing six runs to take the loss.

“You feel for a guy like that,” Lawrence said of Gausman. “You don't want anybody to go down in those situations and, at the same time, you know that you have to be ready to go and go out there and perform, while putting it in the back of your head.

“You still think about it and hope that hopefully everything's O.K. but then you've got a job to do.”