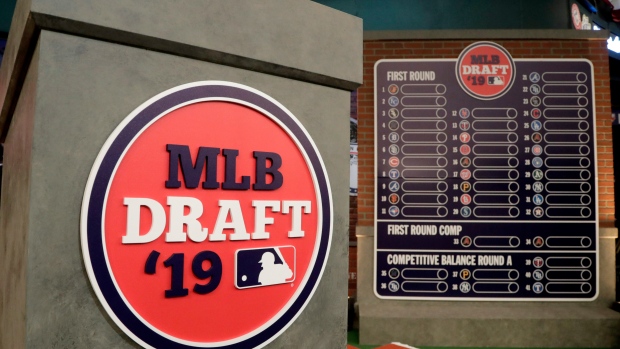 The rostrum is viewed at the MLB Network prior to the first round of the Major League Baseball draft, Monday, June 3, 2019, in Secaucus, N.J. The Toronto Blue Jays hold the No. 5 pick in Wednesday's MLB Draft, their highest draft position since taking Vernon Wells at No. 5 in 1997. THE CANADIAN PRESS/AP-Julio Cortez

A most unusual 2020 MLB Draft will begin Wednesday with the Toronto Blue Jays set to pick from a rather noteworthy position.

Trimmed to just five rounds from the usual 40 in a cost-cutting move due to the COVID-19 pandemic, the Blue Jays are tabbed to select fifth overall for the first time since taking Vernon Wells at No. 5 in 1997.

"The pressure gets limited a bit just by taking comfort in the amount of work I know that our staff has done since the (league) shutdown," Blue Jays amateur scouting director Shane Farrell said Monday.

"So to have the chance to pick fifth overall and to have a slightly better pool of players available to us in the grand scheme of the draft is really exciting and an opportunity I'm looking forward to on Wednesday."

Detroit has the first overall pick, followed by Baltimore, Miami and Kansas City. Arizona State first baseman Spencer Torkelson is a favourite to go first overall to the Tigers.

"We're entering this draft very open to all demographics and to the entire player pool," Farrell said. "We try not to be hyper-focused on one individual or one subset of players."

With the sport on hiatus, the draft will provide baseball-starved fans at least some measure of satisfaction. Major League Baseball and the players' association have been exchanging proposals regarding a potential return but nothing has been finalized.

The draft was originally scheduled to be held this week in Omaha, Neb., ahead of the now-cancelled College World Series. Instead, a two-day virtual draft will begin Wednesday at the MLB Network studios in Secaucus, N.J., with the first 37 picks on tap that night.

The condensed selection process will save MLB nearly US$30 million in signing bonuses. The Blue Jays have a set bonus pool of $9,716,500 this year and can spend $6,180,700 on their first selection.

Farrell, the son of former Blue Jays manager John Farrell, was named amateur scouting director in January. He succeeded Steve Sanders, now an assistant general manager with the Pittsburgh Pirates, in the role.

"I think a successful draft is really making sure we're staying true to organizational philosophies and values and most importantly our process when it comes to selecting these players," Farrell said on a conference call.

Signing bonuses may be deferred and the deadline for selected players to sign has been pushed from July 10 to Aug. 1.

"I think you have to enter each draft with a very open mind and really take a best player approach," Farrell said. "There obviously has been a bit of a youth movement recently in baseball. We've also seen a lot of college players over the years kind of navigate the minor leagues a little quicker than normal I'd say.

"But I don't think that in terms of a timeline that really factors into our decision-making."