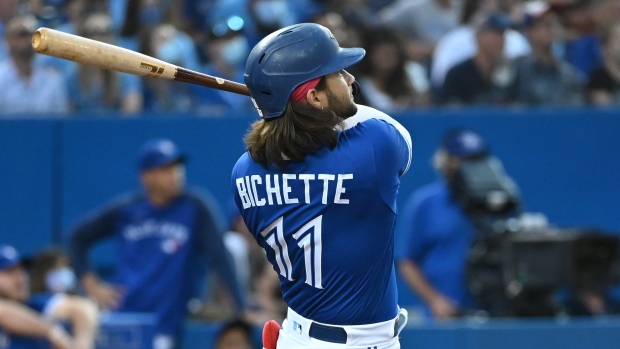 TORONTO - Ross Stripling demonstrated for the second straight outing he wants to stay in the Toronto Blue Jays rotation.

Backed by Bo Bichette's two-run blast in the fourth inning and run-scoring single in the sixth, Stripling was spot on with six strikeouts and allowed three hits in his six innings in the Blue Jays' 3-0 win against Cleveland on Thursday.

He kicked off the Blue Jays' strong first week back - six wins in seven starts - at the Rogers Centre with a win against the Kansas City Royals last Friday.

For the short term, Toronto will stick with a six-pitcher rotation because the Blue Jays have doubleheaders on Saturday at home against the Boston Red Sox and on the road against the Anaheim Angels on Tuesday.

But with the addition of Jose Berrios through a trade last Friday, either Stripling or Steven Matz will dropped to the bullpen. Matz also enjoyed a strong outing in an 8-6 win against Cleveland on Wednesday.

“That's been my career for six years,” Stripling said. “I've always been kind of battling for that spot. The difference is it's right in my face right now.

The three-game sweep of the Royals and taking three of four from Cleveland (52-54) sets up the Blue Jays for a critical four-game weekend series against the Red Sox, which begins in Toronto on Friday.

Toronto has its big four starters ready to rumble. Alek Manoah (3-1) will get the call on Friday, followed by Robbie Ray (9-5) and newcomer Berrios (8-5) for Saturday's doubleheader and Hyun Jin Ryu (11-5) for the finale on Sunday.

Toronto will enter the series 2.5 games behind the Oakland A's in the race for the final American League wild-card spot.

“I've made the playoffs every year in my career,” said Stripling, who saw post-season action with the Los Angeles Dodgers in his first four seasons and with the Blue Jays last fall. “I fully expect to make it again this year.

“We need tunnel vision (against Boston). We're kind of clicking right now. We don't have to worry about who we're playing.”

Stripling credited work on his leg kick and an effective changeup for his recent improvement. If he is sent to the bullpen he knows that if he keeps throwing well Blue Jays manager Charlie Montoyo will find a way to use him.

Stripling (5-6) got off to a rocky start because of an error from first baseman Vladimir Guerrero Jr., on a grounder from Cleveland leadoff batter Bradley Zimmer and a one-out walk to designated hitter Franmil Reyes.

But Stripling settled down to retire the next 12 hitters he faced, and an Oscar Mercado groundout gave the Blue Jays righty a no-hitter through 5 1/3 innings.

However, light-hitting second baseman Owen Miller checked in with Cleveland's first hit, a single to left field, on the very next at-bat.

Cleveland starter Triston McKenzie (1-5) retired the first 10 Blue Jays in order. But Guerrero broke up his no-hit bid by drilling a one-out single through the left side of the infield in the fourth.

After Marcus Semien fouled out to third baseman Ernie Clement, Bichette smacked his 20th homer on a 2-0 slider into the first row of the second deck in left field.

Bichette and McKenzie are friends from their days growing up and playing against each other in Florida.

“I take no glory in hitting a homer off my friends,” Bichette said.

Semien slammed a two-out double to left in the sixth and scored on Bichette's single up the middle.

In the eighth inning, Guerrero was hit on the left hand by Cleveland reliever Bryan Shaw, but the Blue Jays first baseman stayed in the game. Montoyo remarked afterwards his star player was fine.

McKenzie went seven innings with five hits, four strikeouts and no walks. But he hasn't won since a decision against Kansas City went his way on May 6.

This report by The Canadian Press was first published August 5, 2021.