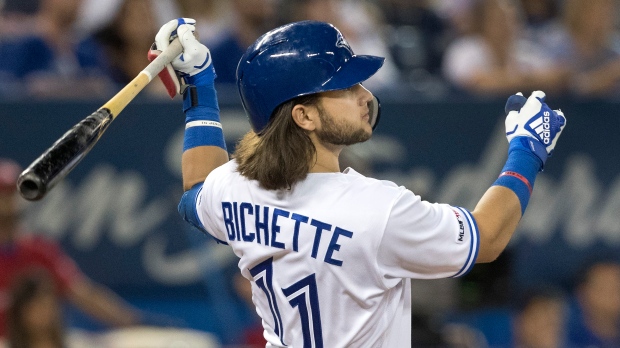 TORONTO - Bo Bichette knows where he stands in his chase for history.

The Blue Jays 21-year-old rookie shortstop claims he's not thinking too much about his career-opening on-base streak that reached 17 games Wednesday with a sixth-inning double in a 7-3 loss to the Texas Rangers.

But he knows there now only is one player to catch.

Bichette passed Ted Williams with No 15 on Monday. He pulled into a tie with former Los Angeles Bill Russell (1969) at 17, and now trails only Baldelli who reached base in 24 straight games to begin his career in 2003.

“I'm sure Rocco is going to send me a text, 'give him the day off' or something,” Montoyo said. “How many more does he need? I'll talk to Rocco about it.

“When it comes to Bo I'm learning a lot about Ted Williams and Mel Ott and all these people. That's pretty cool. I think it's amazing and I don't take it for granted that I'm watching that. He's making history against good pitching.”

The Blue Jays have gone 11-6 since Bichette joined the team on July 29, but had no answer for the Rangers on Wednesday as Texas avoided a three-game sweep in Toronto. Shortstop Elvis Andrus led the way with four hits and two runs batted in.

Bichette's father, Dante, a four-time all-star in his playing career with the Colorado Rockies, was especially impressed when his son passed Williams, a Hall of Famer whom Dante knew well.

“When they mentioned on TV that I had passed Ted Williams, my dad called me, 'Dude, I get you're passing some legendary players, but Ted Williams, that's crazy,”' the younger Bichette said.

“(Williams) is somebody my Dad looked up to a lot. Actually, they were relatively good friends until Ted passed away. They would talk hitting a lot and stuff.”

Dante Bichette was inducted into the Ted Williams Hitters Hall of Fame in 2016. But before then, Bichette and Williams met at a banquet and talked hitting well into the night.

Bo Bichette also has become the first major leaguer to smack 16 extra bases in his first 17 games and 18th player since 1913 to check in with 27-or-more hits in 17 games.

Bichette also has become more reliable in the field since his back-to-back two-error games in Baltimore and Tampa Bay on Aug. 4-5. Bichette has used the Blue Jays current homestand to get in some extra fielding work before games.

Andrus,30, smashed three singles and a double to move closer to becoming the all-time hits leader in Rangers history. His 1,683 career hits are second to Rafael Palmeiro's 1,692.

In his first four-hit game since Aug. 10, 2018, Andrus knocked in a run with a single in a three-run fourth inning and with a double in the sixth inning to make it 5-1.

Texas lefty Kolby Allard (1-0) picked up his first win for the Rangers since he was acquired from the Atlanta Braves on July 30. He yielded three runs on four hits in 5 2/3 innings.

Toronto starter Sean Reid-Foley (2-3), who made his Major League debut a year and one day ago, lasted only 88 pitches and 3 1/3 innings.

The Rangers clubbed a pair of late solo homers from Nomar Mazara in the seventh and Danny Santana in the eighth.