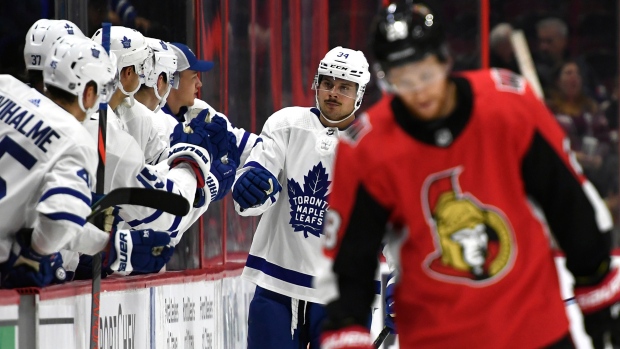 OTTAWA - Brady Tkachuk's empty-net goal wound up the winner as the Ottawa Senators held on for a 4-3 win over the Toronto Maple Leafs on Wednesday in pre-season action.

Connor Brown, Tyler Ennis and Max Veronneau scored for the Senators as they beat Toronto for the second straight night to remain undefeated in the pre-season.

Craig Anderson allowed one goal on 22 shots through two periods before Filip Gustavsson took over in the third giving up one goal on 18 shots.

Matthews made it a one-goal game at the seven-minute mark of the third as he won a battle in the slot and batted a puck out of mid-air and past Gustavsson.

The Senators appeared to ice the game when Tkachuk put the puck into Toronto's empty net, but once again the Leafs were able to make it a one-goal game as Shore beat Gustavsson with 44 seconds remaining in regulation.

Trailing 2-0, the Leafs cut the lead in half early in the second period on a delayed penalty call as Matthews played give-and-go with Morgan Rielly before beating Anderson.

Ottawa regained its two-goal lead less than two minutes later as Ennis picked up the puck in the slot and rifled a shot past Hutchinson.

The Senators got off to a good start taking a 2-0 first period lead with goals by Veronneau and Borowiecki.

Veronneau opened the scoring midway through the first with a power-play goal, while Brown tipped a Borowiecki shot from the blue-line.

Thomas Chabot was a late scratch for the Senators as he wasn't feeling well after the warm-up and was replaced by Hubert Labrie.

Both teams are back in action Saturday night as the Senators host the Montreal Canadiens, while the Leafs will host the Buffalo Sabres.