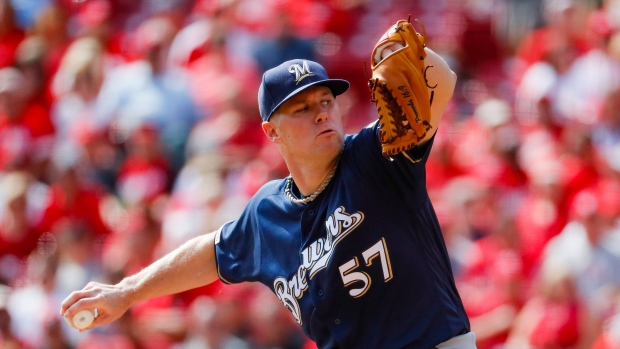 MILWAUKEE - The Brewers cut $15 million in payroll for next season, trading right-hander Chase Anderson to the Toronto Blue Jays on Monday for prospect Chad Spanberger and declining a $7.5 million option on first baseman Eric Thames.

Anderson was 8-4 with a 4.21 ERA in 27 starts and five relief appearances. Milwaukee had planned to decline his $8.5 million option, which would have made him eligible for salary arbitration, and Toronto exercised the option following the trade.

Signed to $16 million, three-year contract after establishing himself in the South Korean League, Thames hit 59 homers in three seasons with Milwaukee.

While Thames does not have six years of major league service, his contract included a provision stating he would become a free agent when the deal ended.

“We'll continue to be in touch with Eric and his agent and we'll see if there's a fit at some point later in the off-season but at this point, at the dollar value associated with his club option and with the market we see developing at that position, we thought it was in the best interest to decline the option,” Brewers general manager David Stearns said,

Anderson, 31, was 38-27 with a 3.38 ERA in 166 appearances over four seasons with the Brewers, who acquired him with infielders Aaron Hill and Isan Diaz from Arizona in January 2016 for Jean Segura and Tyler Wagner.

“Given there was a team that clearly had interest in him and we were able to get back a prospect that we liked, we thought it was the right move to make,” Stearns said.

Spanberger, a first baseman and outfielder, hit .237 with 13 homers and 59 RBIs this season at Double-A New Hampshire. Selected by Colorado in the sixth round of the 2017 amateur draft, he was acquired by Toronto in the July 2018 trade that sent reliever Seunghwan Oh to Colorado.

“We think he fills in nicely at the upper levels of the minor league system,” Stearns said.

Milwaukee also exercised a $1.85 million option on catcher Manny Pina, who would have received a $150,000 buyout if it had been declined. The 32-year-old hit .228 with seven homers and 25 RBIs in 158 at-bats this season, his fourth with the Brewers.