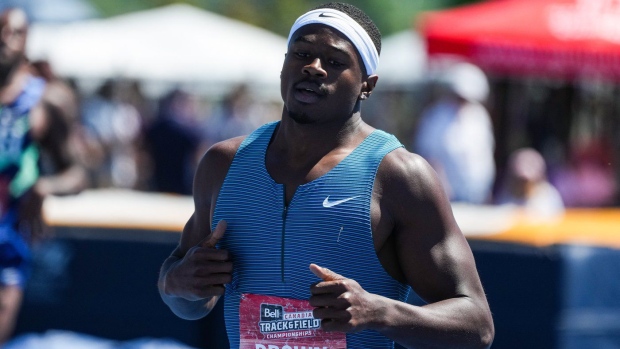 Aaron Brown, of Toronto, races to a first place finish in the men's 200 metre final at the Canadian Track and Field Championships in Langley, B.C., on Sunday, June 26, 2022. THE CANADIAN PRESS/Darryl Dyck

But the victories mean more these days. And the reason was sitting in the front row at McLeod Athletic Park this weekend - his son Kingsley, dressed in a tiny T-shirt that read: “Team Brown.”

Brown, a 30-year-old from Toronto, won the 200 metres at the Canadian track and field championships on Sunday in a season's best 20.03, less than 24 hours after he'd raced to victory in the 100.

“The other ones, it's easy to take them for granted sometimes because you're always focused on the big championships. You want that glory. But wow. Ten times. That's a lot. We have some great people in Canada in the sprints,” Brown said.

Jerome Blake of Burnaby, B.C., Brown's teammate on the 4x100 relay that won silver at the Tokyo Olympics, took 200 silver in 20.32. The field was missing Olympic 200 champion Andre De Grasse, who announced early in the week he had tested positive for COVID-19.

The wind was just inside the legal limit at 1.8 metres per second. Natassha McDonald of Mississauga, Ont., wasn't so lucky. She won the women's 200 in 22.67, dipping under the world championship qualifying standard. But the wind was an illegal 2.1.

Brown, who won double-gold for the fourth Canadian championships, said having his 17-month-old son with him this weekend made for some special moments. Brown cradled Kingsley in his arms on the medal podium. The presenter gave Kingsley a medal as well.

“These are legacy-defining moments not just in track but as a father too,” Brown said. “Those hit differently, too. It's always special when you can incorporate family in what you do.

“One day he'll look back and see what I did. If he wants to be a sprinter one day I'll tell him he has 10 championships to catch his dad,” he added with a laugh.

Brown will make his fifth world championship appearance in Eugene, Ore., making him one of Canada's most enduring track athletes. He's not sure when he'll retire, but says he's started to contemplate what the end of his career might look like. He hopes Kingsley, named for Brown's grandfather, remembers these moments.

“At some point, my passions are going to turn into one to be more present with him because a lot of sacrifice that goes into this, a lot of travelling. A lot of times I'm not really there. My wife has to kind of take the reins because I need to get proper sleep, I can't really be messing around with him when he's acting like a fool overnight.

“But until then, my wife â€¦ believes my dreams. And I'm going to keep going until it's time.”

The turnaround between races was short for the sprinters. Finalists ran two sessions of the 100 on Saturday. After a massage and a doping test, Brown didn't leave the stadium until almost midnight. He ordered Denny's for dinner in his hotel room, and was back at the track Sunday morning for two sessions of the 200.

Alysha Newman was feeling the schedule crunch as well. She cleared 4.40 metres to win the women's pole vault a couple of hours after smashing her knee en route to an eighth-place finish in the women's 100-metre hurdles.

But after suffering a serious concussion last spring that sidelined her for months, the fact she competed - and performed well - was a victory in itself.

“To just be like 'Newman is back on the track,' that to me is just really exciting because it's been a while for me, and when you go through an injury like that, it's really hard to know where you are going to end up after,” she said.

The 27-year-old from London, Ont., who won gold at the 2018 Commonwealth Games, suffered a concussion last April when she slipped and fell in a hotel tub. Her goal had been a medal at the Tokyo Olympics. Instead, she missed on all three of her jump attempts.

Sunday's win wasn't without its own challenges. Her coach Doug Wood wasn't there after testing positive for COVID-19 two days earlier.

“It's the first time since my concussion that I hadn't had a coach, so it was really exciting for me to run down there and just like put everything, my doubts and my fears behind me, and then claim my Canadian championship,” she said.

“That's what we want to take into worlds, I want to take that (feeling) that I already deserve to be up there. I have to manifest it really.”

In the sizzling 31 C heat, and with swirling winds that almost made Newman quit before attempting 4.40 for safety reasons, she missed on her first two attempts at the winning height. But Wood texted her agents to pass along a message: all she has to do is win.

“As soon as he said that I calmed down and I ran down and I took off. He's my centrepiece. He's almost like that temple for me,” said Newman, who cleared a world-qualifying 4.70 in a recent meet in London, Ont.

Liz Gleadle of Vancouver won her 11th javelin title with a throw of 60.88 metres, while Christabel Nettey of Surrey, B.C., jumped 6.63 to win the women's long jump.

The Canadian championships were the final chance for athletes to achieve standards or gain important ranking points to secure spots on the team for the world track and field championships July 15-24 in Eugene, Ore.

The Canadian team will be announced Wednesday.

This report by The Canadian Press was first published June 26, 2022.