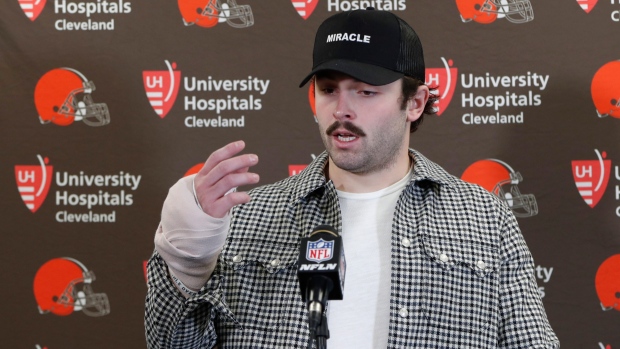 Mayfield, who hurt his hand in the first half of Sunday's loss at Pittsburgh, didn't throw a pass during the 20 minutes of Wednesday's practice open to reporters. Mayfield's hand and thumb were heavily wrapped as he watched backup Garrett Gilbert and practice squad QB Eric Dungey toss passes.

Mayfield bruised his hand when he struck it on Steelers linebacker Bud Dupree's facemask while attempting a long pass just before halftime. X-rays were negative and Mayfield played the second half while wearing a glove.

Mayfield was unable to rally the Browns (5-7), whose playoff hopes took a big hit with the loss to their AFC North rivals. Mayfield threw an interception on his final attempt as the Browns had their three-game winning streak halted.

While Mayfield's status for this week's game against Cincinnati remains suspect, the Browns got back starting left tackle Greg Robinson, who cleared concussion protocol and practiced.

Robinson sat out against the Steelers and the Browns' offensive line struggled to protect Mayfield, who was sacked five times and under constant pressure. The No. 2 overall pick in 2014, Robinson has started 10 of Cleveland's 12 games.

Free safety Damarious Randall, who didn't travel to the Steelers game for disciplinary reasons, practiced and is expected to return to the starting lineup.