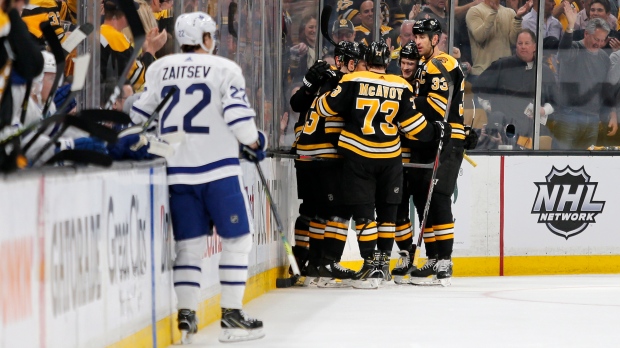 BOSTON - The Maple Leafs knew what was coming. They were powerless to stop it.

Brad Marchand and Charlie Coyle scored during a raucous opening period as the Boston Bruins downed Toronto 4-1 on Saturday to even the teams' first-round playoff series at one game apiece.

Hits were flying, the referees largely put their whistles away and it got ugly late, especially from a Toronto perspective, after Nazem Kadri levelled Jake DeBrusk with a vicious cross-check to the face with six minutes left in the third.

The Leafs now have to regroup for Monday's Game 3 at Scotiabank Arena, likely minus one of their most influential players, especially at this time of year.

“Their intensity was at a different level,” said Toronto head coach Mike Babcock, whose team won the opener by the same 4-1 score. “We didn't handle their forecheck and execute. It's nothing that we hadn't talked about or prepared for.

“We turned the puck over. In the end that cost us.”

Danton Heinen and Patrice Bergeron had the other goals for Boston, which flexed its muscle following Thursday's lacklustre effort. Tuukka Rask stopped 30 shots, while Marchand added an assist.

“We didn't play to our identity in Game 1. We all knew that. We were aware of it,” Bruins head coach Bruce Cassidy said. “How do you respond? You're physical. Win the puck battles. Control momentum in the first period. Attack when you have the chance.

“We hit a lot of check lists. Basically let them know how we're going to play.”

Kadri, who was banned three games in last year's first-round series against the Bruins following an ugly boarding penalty, scored for Toronto four minutes before the final incident with DeBrusk that resulted in a five-minute major and a game misconduct.

The NHL's department of player safety tweeted early Sunday that Kadri has been offered an in-person hearing, meaning he could be suspended for more than five games.

“We knew they were going to come hard,” Toronto centre John Tavares said. “You've got to stay with it and find your game.”

The Leafs neutralized Boston's top line of Marchand, Bergeron and David Pastrnak at 5 on 5 in their 4-1 victory in Game 1, while Mitch Marner led and offensive surge with two goals.

There would be no repeat on this night.

The Bruins came out of the gate with a purpose, bludgeoning every Toronto player in sight and building a 2-0 lead after 20 minutes inside an electric TD Garden.

Inserted into the lineup after getting healthy scratched for Game 1, veteran winger David Backes was first to a loose puck behind Toronto's net before feeding Coyle in front to bury a shot past Frederik Andersen, who was terrific in making 37 saves, for a 1-0 lead just 4:44 in.

The Bruins continued to push the physical side, much to the delight of the boisterous Boston crowd. DeBrusk and Kadri went off for roughing after wrestling on the ice, although the latter did little to warrant a penalty, save for getting punched in the face.

DeBrusk then went after Leafs defenceman Travis Dermott near the benches, punching the rookie blue-liner repeatedly in a sequence that didn't result in a penalty.

“That first 10 minutes, they were physical, tried to make a statement,” Leafs centre Auston Matthews said. “We weathered the storm as well as we could.”

Boston went up by two on another Toronto defensive miscue at 16:04 when Jake Muzzin whiffed on the puck with his glove in the neutral zone. Pastrnak promptly fed a no-look-behind-the-back pass to Marchand, who slid a shot between Andersen's pads.

The Leafs, who lost to the Bruins in seven games in both 2013 and last spring, could do nothing with a power play that stretched between the first and second periods before Andersen made two more big stops on DeBrusk and Karson Kuhlman.

Muzzin crushed Torey Krug along the boards midway through the period on a hit that sent the wobbly Bruins defenceman to Boston's locker room.

Krug did not return, but the Bruins scored just 11 seconds later when William Nylander inexplicably lost the puck at the side of Toronto's net, leaving an easy tap-in for Heinen at 10:39.

Andersen - by far the best Leaf - robbed Heinen with an exceptional glove save on a power play before Rask made a toe stop on Andreas Johnsson.

Kadri was assessed a hooking penalty late in the period, and as he raced to get back in the play, took a knee-on-knee hit from DeBrusk. Kadri stayed down, skated off on his own and returned for the third.

“I thought it was clean, looking back on it, shoulder to shoulder,” Cassidy said. “Kadri stayed down. That's his prerogative.”

Kadri broke Rask's shutout bid on a deflection at 10:44, but in a moment of madness cross-checked DeBrusk after the Bruins winger hit Patrick Marleau into the curved glass at the end of the bench.

Babcock said if Kadri, who has already been suspended four times in his career, is indeed forced to the sidelines, either Nylander or Marleau will move to centre on the third line behind Matthews and Tavares.

Bergeron scored on the ensuing power play at 15:03 to put a bow on Boston's victory as the Leafs now turn their attention to Game 3 - likely without Kadri.

“Naz is a crucial part of our team,” Tavares said. “Whatever the circumstances are, we believe in the guys in our locker room.”