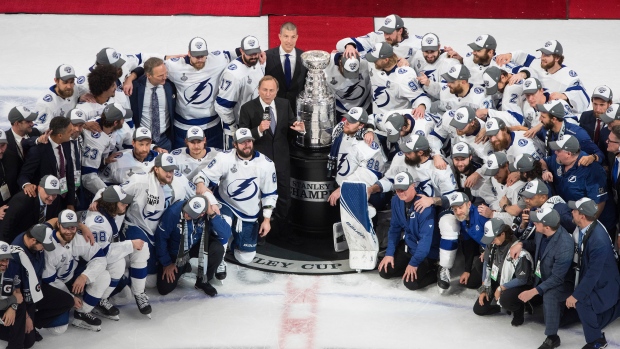 EDMONTON - The Tampa Bay Lightning are the 2020 Stanley Cup champions, defeating the Dallas Stars 2-0 Monday to capture the NHL's top trophy in front of empty seats, sprawling tarps, and no fans at Rogers Place.

The Lightning players exploded off the bench as the seconds ticked to zero, swarming Vasilevskiy, their whoops and hollers echoing around the arena.

The Lightning are the champions of the so-called bubbled NHL playoffs, with players kept in isolation for the past two months. Games were played without fans in attendance in hub cities of Edmonton and Toronto to prevent the spread of COVID-19.

The Lightning won the best-of-seven series 4-2 for the second championship in the 28-year-history of the franchise. The first cup came in 2004.

Vasilevskiy played all 25 post-season games for Tampa, including nine overtime affairs. One of those, against the Columbus Blue Jackets in the first round, was a five-overtime marathon. His record was 18-7.

Tampa Bay outshot Dallas 29-22, and outshot them in every game of the series.

Point scored on the power play midway through the first period, sailing through the slot untouched and putting his own rebound past Dallas goalie Anton Khudobin.

Coleman made it 2-0 by capitalizing on a turnover midway through the second frame, one-timing a cross-ice pass from Cedric Paquette.

Nikita Kucherov assisted on Point's goal and was the NHL's top scorer in the playoffs with seven goals and 34 points. Point was second at 14 goals and 33 points.

Khudobin finishes the playoffs with a 14-10 record.

The Lightning finished fourth in the regular season (43-21-6) when play was suspended around the 70-game mark on March 12 due to the COVID pandemic.

Tampa was a model of consistency in the return-to-play tournament that began in early August.

The Lightning went 18-7, never lost two games in a row, and shut down the top three defensive teams in the league (Boston, Dallas, and Columbus).

The Bolts were overtime warriors, going 7-2 in extra-session games. They played 221:14 total in overtime, more than any team in playoff history.

It's the first Stanley Cup for every Lightning player except Pat Maroon. The burly, bearded veteran winger won it all last season with the St. Louis Blues.

It's also the first Cup for head coach Jon Cooper, in his seventh full season behind the bench for Tampa.

He defeated Dallas interim head coach Rick Bowness. Bowness had been hired by Cooper as a mentor in 2013 and served the next five years with the Lightning as his assistant.

The Bolts had been knocking on the Cup door in recent years, making the final four in four of the last six seasons. In 2015 they lost to Chicago 4-2 in the final.

The Stars franchise is now 1-4 in the Stanley Cup final, dating back to its Minnesota North Star roots. The lone championship came in 1999.