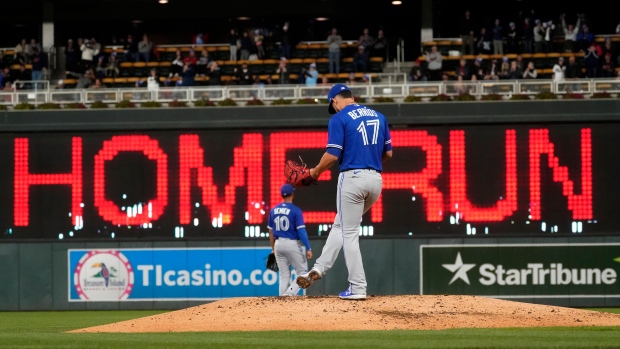 Toronto Blue Jays pitcher Jose Berrios sweeps the mound with his foot after giving up a three-run home run to Minnesota Twins' Byron Buxton in the third inning of a baseball game, Friday, Sept. 24, 2021, in Minneapolis. (AP Photo/Jim Mone)

Buxton hit his 15th home run of the season in a three-run third inning against Berrios (12-9), who was making his first start in Minnesota since being dealt to Toronto at the trade deadline. Berrios pitched six seasons for the Twins after being a first-round draft pick by the club in 2012.

The final road trip of the season has complicated the Blue Jays' chances for a playoff spot. Toronto is 1-4 on the trip after going 1-2 in Tampa Bay and losing the first two games in Minnesota.

The New York Yankees beat Boston 8-3 on Friday, with the teams tied for the top AL wild-card spot. The Blue Jays are three games back.

Marcus Semien hit his 42nd home run for Toronto, a solo shot to the bullpens in left-center in the sixth inning. Semien is one homer shy of the all-time record for second basemen, set by Davey Johnson with Atlanta in 1973. He equaled Minnesota's Brian Dozier (2016) and St. Louis Hall of Famer Rogers Hornsby (1922).

Bailey Ober (3-3) surrendered one run over 5 1/3 innings for Minnesota, which has won four in a row, yet still sits in last place in the AL Central.

Berrios, who is 12th on the Twins' all-time list in strikeouts and 15th in wins, received a warm ovation from the crowd after being announced. He walked Andrelton Simmons to open the third and Luis Arraez followed with a triple. Then, Buxton unloaded deep to straightaway centerfield for a homer against his former teammate.

Toronto manager Charlie Montoyo said the news on Lourdes Gurriel Jr.'s injured hand was good and bad. Gurriel doesn't have any broken bones after his hand was stepped on by teammate Randal Grichuk on an outfield play in Thursday's game. Gurriel did receive stitches in his middle finger.

Montoyo said Gurriel is day to day. Montoyo said throwing will be tougher than hitting for Gurriel, hinting at a possible earlier return as a DH.

The Blue Jays announced increased ballpark capacity for the final six home games of the season. Capacity will be increased to 30,000 for the final homestand of the regular season.

Proof of full COVID-19 vaccination is required for all fans 12-and-under. The team said a negative COVID-19 test will no longer be accepted, except for individuals with a doctor's note indicating they have a medical exemption.

Twins: OF Max Kepler was out of the lineup as he deals with an illness unrelated to COVID-19. Manager Rocco Baldelli said Kepler could possibly miss Saturday's game as well.

Twins: Minnesota hadn't announced a starter for Saturday, in part, because rookie RHP Joe Ryan left the team Friday to travel to San Francisco to deal with a family-related matter. Ryan could possibly return to start Sunday. Griffin Jax is currently scheduled to start Sunday.