Calling plays in NFL a challenge for some rookie NFL coaches 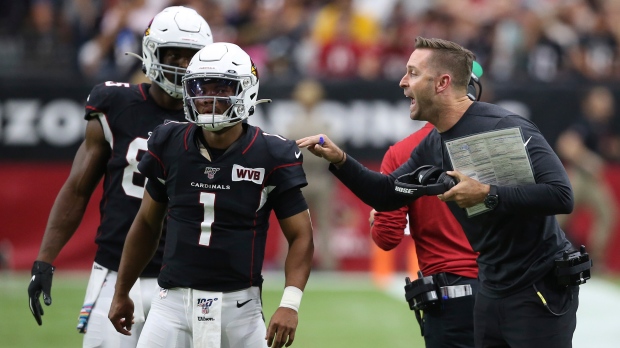 FILE - In this Sunday, Oct. 13, 2019, file photo, Arizona Cardinals head coach Kliff Kingsbury talks with quarterback Kyler Murray (1) during the first half of an NFL football game against the Atlanta Falcons, in Glendale, Ariz. Being a rookie head coach in the NFL is challenging enough, and also calling plays for the offense only increases the difficulty. Murray has helped ease the growing pains for Kingsbury. (AP Photo/Ross D. Franklin, File)

Maybe Sean McVay made it all look just too easy.

McVay coached the Los Angeles Rams to the playoffs each of his first two seasons, including the Super Bowl in February. He proved such a perfect match with quarterback Jared Goff that six of eight NFL teams hiring this off-season turned to offensive-minded coaches to turn their franchises around.

Adding play calling to a rookie head coach's job description, it turns out, can be too difficult for newcomers to handle along with basic game management.

Aaron Rodgers in Green Bay and Kyler Murray in Arizona have eased the growing pains for Matt LaFleur and Kliff Kingsbury. Zac Taylor in Cincinnati and Freddie Kitchens in Cleveland , on the other hand, are being second-guessed for trying to do too much halfway through their first seasons. And neither is willing to lighten the load and hand off play-calling duties.

Taylor is the first Bengals coach to lose his first eight games, and his big change at Cincinnati's bye is benching veteran Andy Dalton for rookie Ryan Finley. Taylor will continue to call plays for the NFL's last winless team.

"We've won zero games and have not scored enough points," Taylor said. "And that 100 per cent falls on me. But I do like the communication we have as a staff. The play calls come out of my mouth. We have great chemistry as a staff. We put a good plan together, and we are all on the same page when the calls come out regardless of who call it."

Neither Kitchens nor Taylor had ever been head coaches at any level until this season, and they have little experience calling plays. At least Kitchens can point to how Browns quarterback Baker Mayfield blossomed over the second half of last season once Kitchens was promoted to offensive co-ordinator from running backs coach.

Taylor called plays for the final five games in 2015 with the Miami Dolphins and was offensive co-ordinator in college at Cincinnati in 2016. The Bengals hired Taylor after he was assistant wide receivers coach in 2017 and quarterbacks coach in 2018 with the Rams -- and McVay, who calls his own plays.

And Taylor uses a play-action system similar to the Rams that is heavily dependent on a decent run game. Unfortunately, the banged-up Bengals rank last in the NFL averaging 59.5 yards rushing a game and have been held under 35 yards four times. Cincinnati's offensive line has struggled so much Taylor has had to keep tight ends in to help block.

The Browns are 2-6 after being popular picks to win the AFC North. Injuries have been a big issue. But Kitchens has appeared overwhelmed at times on the sideline. Kitchens was criticized heavily for not calling a running play inside the 10 late in a 20-13 loss to the Rams in September. Mayfield threw four times, the last intercepted in the end zone. The Browns coach took the blame for his play-calling in that fourth quarter.

More than a month later, Kitchens called a shovel pass New England intercepted on its way to a 27-13 win. Worse, the Browns' offence ranks 25th, scoring 19 points a game.

"Everything about the program should reflect on me and I will accept it," Kitchens said. "But I also have a hand in fixing it."

Arizona hired Kingsbury in part because he coached the 2018 NFL MVP Patrick Mahomes during his tenure as head coach at Texas Tech. The Cardinals drafted Murray with the No. 1 pick overall in April, and the duo has helped the Cardinals start 3-5-1.

Still, Kingsbury has had his growing pains.

"I'm used to 80 or 85 snaps, and now you're getting 65, maybe 70, so you have to make sure when you look at that sheet, you're not just calling something to get it called or playing really fast because you're trying to out-manoeuvr them with tempo," Kingsbury said. "You have to make sure you have a point to every play, and that's helped me throughout this first month and a half get adjusted."

Then there's LaFleur who is working with the 35-year-old two-time MVP in Rodgers. LaFleur was the Rams' co-ordinator in McVay's rookie season and only called plays in 2018 as Tennessee's co-ordinator before Green Bay hired him. But the Packers are 7-2, and LaFleur says the relationship between quarterback and coach is critical.

"The way I view the quarterback is, it's an extension of the coaching staff," LaFleur said. "And so yeah we got to be on the same page. I think that just like any relationship, it takes time to make sure the communication is on point."

Faster for some than others.