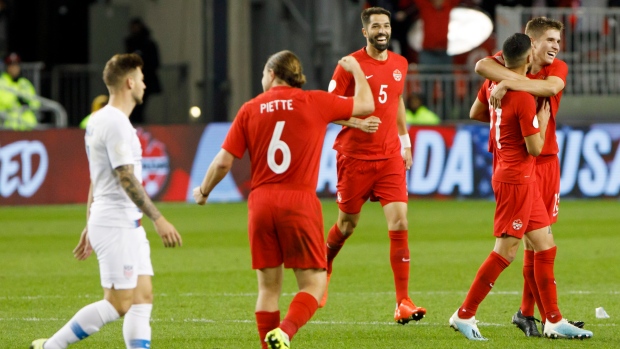 Canada midfielder Jonathan Osorio (21) and teammate Atiba Hutchinson (13) embrace as they celebrate a victory over the United States in second half of CONCACAF Nations League soccer action in Toronto, Tuesday, Oct. 15, 2019. THE CANADIAN PRESS/Cole Burston

TORONTO - The U.S. men's soccer team lost to Canada for the first time in 34 years, allowing second-half goals to Alphonso Davis and Lucas Cavallini in a 2-0 defeat Tuesday night in the CONCACAF Nations League.

A little over two years after the Americans failed to qualify for the 2018 World Cup by losing at Trinidad and Tobago, they saw their 17-match unbeaten streak against their northern neighbour come to an end.

Davies turned in a cross from Scott Arfield. Goalkeeper Zack Steffen put a palm up to block Davies' shot but the ball still dropped over the line as Canada's players rushed to join Davies for a raucous celebration.

Cavallini added a 90th-minute for 75th-ranked Canada, taking long pass and beating Steffen to the near post with a low shot.

Christian Pulisic had a point-blank shot saved by goalkeeper Milan Borjan in the 51st minute.

The 21st-ranked U.S., coming off last week's opening 7-0 home rout of Cuba, had nine wins and eight draws against Canada since a 2-0 exhibition defeat at Vancouver, British Columbia, in April 1985.

Canada is trying to climb into the top six in the region in FIFA rankings, which will be used next summer to determine the nations in the hexagonal will produce the three direct qualifiers from the North and Central American and Caribbean region for the 2022 World Cup.

Defender Ream captained the U.S. for the fourth time.