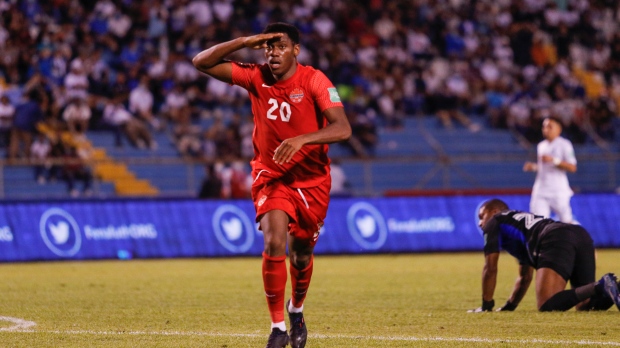 The Canadian men went ahead in the 10th minute on a Honduran own goal, looked comfortable through the first half and managed to hold off the Hondurans in the second half as the home side showed more on offence.

The Canadians took control again, with a huge save by Milan Borjan midway through the second half followed by a Jonathan David goal that kept Canada on the winning track.

Borjan made another remarkable save in second-half stoppage time, pushing away an Alberth Elis Honduran header.

The 40th-ranked Canadians now return home to face the Americans in a top-of-the-table tilt Sunday at Hamilton's Tim Hortons Field before making the 3,400-kilometre trip to San Salvador to face El Salvador next Wednesday.

Three games remain for Canada after this international window. Come March, the top three teams will represent North and Central America and the Caribbean at Qatar 2022 while the fourth-place side faces an Oceania country in an intercontinental playoff to see who joins them.

Canada and the other top sides are creating some separation in the standings.

John Herdman's team is on track to make it to soccer's showcase for the first time since 1986, its only visit to the men's World Cup.

Canada went ahead in the 10th minute via an own goal from Denil Maldonado, set up by some fine work by Tajon Buchanan. The Club Brugge wingback, after a give-and-go with David, danced around defender Diego Rodriguez near the by-line and fired in a hard cross that Maldonado, with Cyle Larin behind him, had to address just in front of goal.

His attempted block went straight into the Honduran goal, giving the Canadians an early cushion. Defender Steven Vitoria started the attack with a fine ball from the back.

Canada need an enormous save from Borjan in the 70th minute to preserve the lead. The 'keeper got his left hand to a well-placed Kervin Arriega header off a Honduran free kick.

David added an insurance goal three minutes later, chipping the goalkeeper after Liam Fraser's perfectly measured long ball found the Lille forward alone behind two defenders. It was David's 19th goal in 25 matches for Canada and it was a beauty.

Thursday's contest matched the top and bottom teams in the final qualifying round-round in CONCACAF, which covers North and Central America and the Caribbean.

Honduras tied Canada 1-1 in September at Toronto's BMO Field but has managed just two ties since.

Canada was without Bayern Munich star Alphonso Davies, who has been sidelined by myocarditis, an inflammation of the heart muscle, after testing positive for COVID. Influential midfielder Stephen Eustaquio was also missing, with Portuguese report saying he had tested positive for COVID. Herdman said prior to the game that he hoped Eustaquio could play some part in the games ahead.

But there was plenty of offensive punch even without Davies, with David, Larin and Junior Hoilett leading the attack in a starting 11 that came into the game with a combined 406 caps.

And Davies was there in spirit, celebrating the first-half Canadian goal as he watched live-streamed on Twitch.

It was a shaky start for Canada, conceding two corners in the first two minutes. But the Canadians rode the early rough waters and began to find their stride.

Honduras had trouble penetrating the final third with Canada showing its teeth on the counter-attack.

There was some Honduran payback for the goal in the 24th minute when Rodriguez scythed Buchanan to the ground, drawing protests from Canadian players.

There was no yellow card on the play but Honduran Alfredo Mejia went in the book in the 29th minute for hacking at David as more of the same followed.

Canada's Samuel Piette needed treatment after his ankle was caught in a clumsy challenge by Edwin Rodriguez in the 34th minute. Jamaican referee Daneion Parchment reviewed the play on a sideline monitor, on the prompting of the video assistant referee, but there was no further sanction.

Piette could not continue, giving way to Fraser in the 39th minute.

Borjan was brave in the 44th minute, rushing out to beat CF Montreal forward Romell Quioto to the ball on the edge of the penalty box. The Red Star Belgrade 'keeper needed help from Vitoria in first-half stoppage time when he collided with a Honduran player in the air trying to corral a cross.

Borjan required treatment on his left arm but kept going.

David shot just wide in the 48th minute after a fine play by wingback Sam Adekugbe to keep the ball in play at the corner flag. David had another chance in the 55th minute, using his speed to beat a defender, but Honduran 'keeper Luis Lopez made the save.

Borjan stopped Anthony Lozano's header in the 58th as Honduras managed to find an attacker in the penalty box.

The game was played at the Estadio Olimpico Metropolitano, where Canada's 2014 World Cup qualifying campaign ended in October 2012 in a humiliating 8-1 drubbing that prevented the Canadians from reaching the final round of qualifying in the region.

Most recently, Canada lost 2-1 there in September 2016 in a 2018 World Cup qualifier. The Canadian men came into Thursday's game with an 0-4-1 record at the stadium.

But capacity Thursday at the 37,325-capacity venue was limited to 50 per cent Thursday due to the pandemic, with wide swaths of empty seats. The field cut up as the match wore on, with chunks being kicked up.

Canada has had little success on Honduran soil in the past however, with a 1-7-3 career record there prior to Thursday's meeting,

Canada's lone previous win in Honduras was in August 1985 in the capital of Tegucigalpa with substitute George Pakos scoring the only goal of the game.

This report by The Canadian Press was first published Jan. 27, 2022