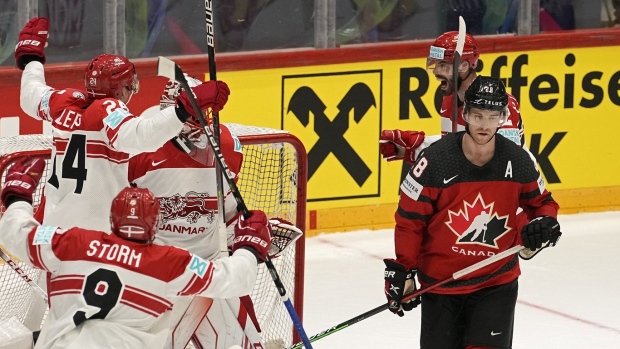 Denmark's players celebrate beside Canada's Damon Severson, right, after winning the group A Hockey World Championship match between Canada and Denmark in Helsinki, Finland, Monday May 23 2022. THE CANADIAN PRESS/AP/Martin Meissner

Denmark beat Canada in the men's world hockey championship for the first time with a 3-2 victory Monday.

Mathias Bau's power-play goal at 12:11 of the third period for a 3-1 lead stood up as the game-winner at Helsinki Ice Hall.

Ryan Graves scored at 16:09 to pull Canada within a goal, but the Canadians couldn't muster an equalizer with goaltender Chris Driedger pulled for an extra attacker.

The top four teams in each pool advance to the quarterfinals.

The Canadians close out the preliminary round against France (1-1-0-4), while the Danes finish against Slovakia (3-3) on Tuesday.

Sebastian Dahm made 29 saves in Denmark's net, while Driedger stopped 21 shot in the loss.

Markus Lauridsen and Peter Regin also scored for the Danes.