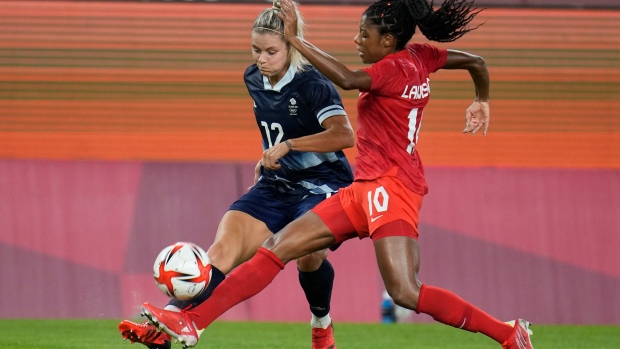 KASHIMA, Japan -- Canada and Britain played to a 1-1 draw in the Group E women's soccer finale for both teams Tuesday at the Tokyo Olympics.

Adriana Leon opened the scoring for Canada in the 55th minute but Britain pulled even in the 85th when Caroline Weir tallied from distance.

Ashley Lawrence made a nice run down the wing and sent a low pass through a maze of players before Leon one-timed it into the top corner. Weir's shot from well outside the area deflected off the side of Nichelle Prince and found the back of the net.

Canada, which entered play as a virtual lock to advance after earning four of six points, was expected to learn its quarterfinal opponent later in the day upon completion of the two late matches in Group F. Britain had opened with two shutout victories.

Eight teams from the 12-country round-robin will move on to the knockout stage. The final is set for Aug. 6 at Tokyo's Olympic Stadium.

Both teams made several lineup adjustments. Canadian captain Christine Sinclair was given the night off as coach Bev Priestman made seven changes to her starting 11 from the squad that beat Chile 2-1 on Saturday.

Defender Kadeisha Buchanan wore the captain's armband. Stephanie Labbe got the start in net after suffering a rib injury in a 1-1 draw against Japan in the tournament opener.

Both Canada and Britain played their first two matches indoors at the Sapporo Dome. Britain, which is unranked by FIFA, uses players from England, Scotland, Wales and Northern Ireland.

With the thumping bassline of the White Stripes hit "Seven Nation Army" blaring throughout the near-empty Ibaraki Kashima Stadium, Sinclair helped lead the cheers as the eighth-ranked Canadian side walked out on the pitch.

Mist hung in the air on a warm, muggy evening at the regular home of the Kashima Antlers of the Japan Professional Football League.

Evelyne Viens, given her first start of the tournament, made her presence felt in the second minute with Canada's best chance of the first half. Her strike from just outside the area forced goalkeeper Ellie Roebuck to fully extend but just missed the target.

Britain's Rachel Daly was sent in alone later in the half but Lawrence made a nice sliding block to send it out of play.

Both teams pressed more in the second half as play opened up. Britain nearly pulled even in the 69th minute but Weir's shot from a tight angle hit the crossbar and the post before being cleared away.