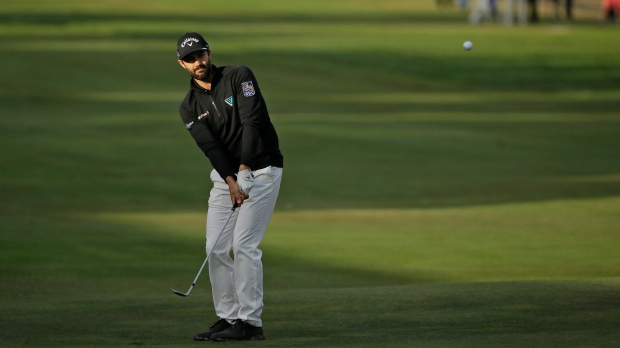 Adam Hadwin, of Canada, chips the ball onto the 18th green of the Silverado Resort North Course during the final round of the Safeway Open PGA golf tournament Sunday, Sept. 29, 2019, in Napa, Calif. Hadwin finished in second place. (AP Photo/Eric Risberg)

Canada's Adam Hadwin has been named to the international team of the Presidents Cup.

It will be Hadwin's second Presidents Cup appearance.

He made his debut two years ago when the international team lost 19-11 to the United States at Liberty National Golf Club in Jersey City, New Jersey.

The Presidents Cup is Dec. 9-15. The Americans will announce their selections on Thursday.

Hadwin, from Abbotsford, B.C., is ranked 44th in the world, 11th on the FedExCup rankings.

Since then, he tied for 41st at the ZOZO Championship with a 1-under score and tied for 46th at World Golf Championships-HSBC Champions at even par.