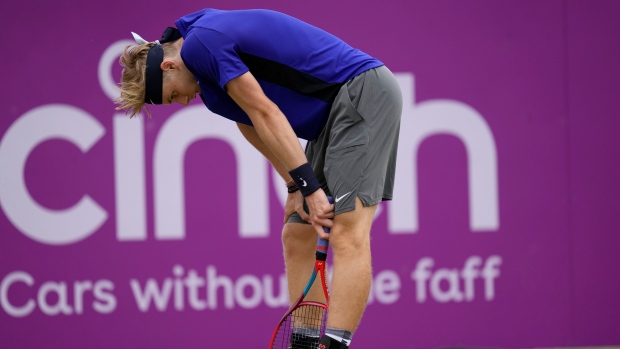 Denis Shapovalov of Canada reacts after he plays a return to Cameron Norrie of Britain during their semifinal singles tennis match at the Queen's Club tournament in London, Saturday, June 19, 2021. (AP Photo/Kirsty Wigglesworth)

Shapovalov, the No. 2 seed from Richmond Hill, Ont., dropped a 7-5, 6-3 decision to Britain's Cameron Norrie at the Fever-Tree Championships in London.

Meanwhile, Auger-Aliassime dropped a 6-4, 3-6, 7-6 (5) decision to Ugo Humbert of France in a battle of unseeded players at the Noventi Open in Halle, Germany.

Russia's Andrey Rublev, the No. 4 seed, defeated Georgia's Nikoloz Basilashvili 6-1, 3-6, 6-3 in the other semifinal. Rublev and Humbert will meet in the final on Sunday.