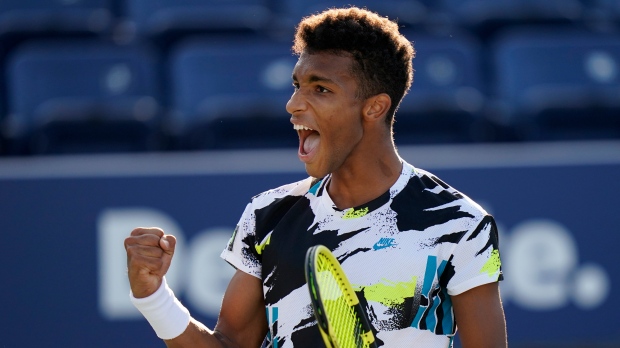 Felix Auger-Aliassime, of Canada, celebrates after winning a match against Corentin Moutet, of France, during the third round of the US Open tennis championships, Saturday, Sept. 5, 2020, in New York. (AP Photo/Frank Franklin II)

COLOGNE, Germany - Montreal's Felix Auger-Aliassime is through the final of the Cologne Open after posting a 6-3, 1-6, 6-3 win over Spain's Roberto Bautista Agut in a semifinal match Saturday.

The 20-year-old Auger-Aliassime, who is looking for his first win on the ATP Tour, will appear in his third final this season and sixth of his career when he faces top seed Alexander Zverev of Germany in Sunday's final of the ATP 250 hardcourt tournament.

Auger-Aliassime's two other finals this year came at indoor hardcourt tournaments before play on the ATP Tour paused due to the COVID-19 pandemic.

He had some success when the tour restarted, reaching the fourth round of the U.S. Open. But he struggled in the next three tournaments when the Tour shifted to clay-surface events, including a first-round loss at the French Open.

“Like everyone knows this year has been difficult. I had a great start to the year indoors, then unfortunately we had to stop,” Aliassime said.

“Last three weeks have been tough on the clay, so I'm happy to be in another final.”

After faltering in the second set, Auger-Aliassime quickly regained momentum with an early break in the third before putting the second-seeded Spaniard away.

The third-seeded Canadian hit into five double faults and won just 64 per cent of his service points, but also fired seven aces and converted three of his six break point chances.

“Today was a difficult match,” Auger-Aliassime said. “To come out on top against a player like Roberto is gratifying.”

Bautista Agut won 70 per cent of his service points and 51 per cent of overall points thanks to his dominant second-set performance. He didn't serve an ace, and also converted three of his sox break point opportunities.

It was the second meeting between Bautista Agut and Auger-Aliassime. The Spaniard won their first meeting at last year's Davis Cup final.

Zverev has defeated Auger-Aliassime in their two previous meetings.

“Sasha deciding to come and play here, myself being one of the young players in the draw, exciting final,” Auger-Aliassime said. “It's our first final against each other, and hopefully it's not the last.”

This report by The Canadian Press was first published Oct. 17, 2020.