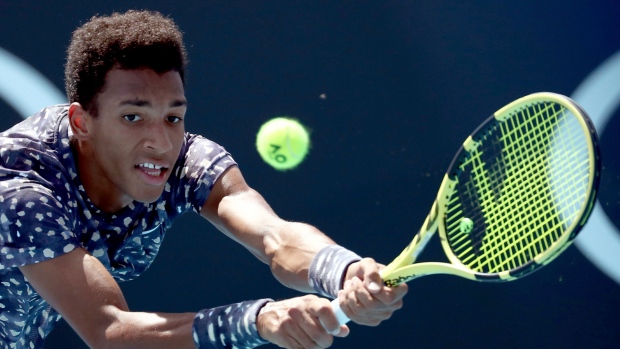 ROTTERDAM, Netherlands - Canada's Felix Auger-Aliassime dropped a 6-2, 6-4 decision to Gael Monfils of France in the final of the ABN AMRO World Tennis Tournament on Sunday.

Monfils, the world No. 9, won the ATP Tour 500 indoor hardcourt event for the second straight year.

With Monfils serving for the match at 5-2, the 19-year-old from Montreal held off four match points before finally getting a service break. Auger-Aliassime then held serve but couldn't break the veteran a second time.

“It was a passive match from me,” said Monfils. “I chose to be in defence quite a lot â€¦ I knew, physically, it would be tough for him to come through me. I was doing this great â€¦ at the end, I was very pleased with my service.”

The Canadian had a 20-15 edge in winners but had 32 unforced errors to just 14 for Monfils, who completed the win in one hour 26 minutes.

“The week has been good, encouraging,” said Auger-Aliassime. “It is the start of the season and the second month I've played. It is encouraging for what is next but I will have to keep working well, doing the adjustments I need to do and keep believing, keep pushing to give myself chances to play matches like these.”

It was the second straight week that Monfils had defeated a Canadian in a final. He beat Vancouver's Vasek Pospisil last weekend to win the Open Sud de France.

“It's an amazing feeling for the first time for me to back it up, year after year, week after week,” said Monfils. “It is a different feeling I have never experienced in my career, so I feel grateful.”

This report by The Canadian Press was first published Feb. 16, 2020.