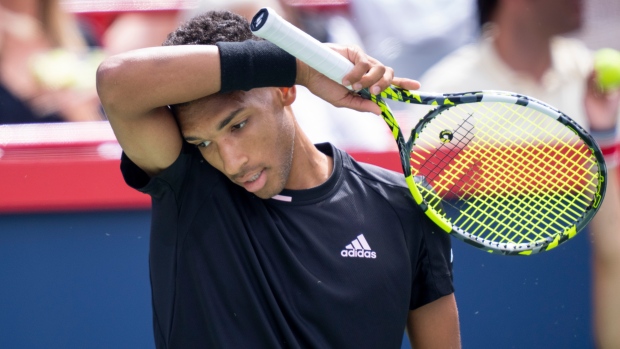 MONTREAL - Felix Auger-Aliassime stood at the back of the IGA Stadium hardcourt with one hand on his hip and a look of astonishment on his face.

Casper Ruud managed to get his racket on an overhead smash late in Friday's quarterfinal at the National Bank Open, the return floating over Auger-Aliassime's head and inside the baseline.

Auger-Aliassime scrambled back but his shot found the net. Nothing was working for him on this day - not even the tennis equivalent of a slam dunk - in a 6-1, 6-2 rout that lasted just 74 minutes.

“(My) first two matches were good, some positive things,” Auger-Aliassime said. “I never thought it would be ending like this today.”

The sixth-seeded Auger-Aliassime entered play without dropping a set this week but he came out flat on an overcast afternoon. Ruud, the No. 4 seed from Norway, wrapped up the first set in a brisk 36 minutes and took the partisan crowd out of the match.

Auger-Aliassime, from Montreal, made 21 unforced errors to just eight for Ruud, who advanced to his third Masters 1000 semifinal of the season.

“It was a perfect day for me at the office,” Ruud said.

Auger-Aliassime was hoping to become the first Canadian to reach the semifinals at this ATP Tour event since Denis Shapovalov in 2017. The last Canadian to win this tournament was Robert Bedard in 1958.

“It's super disappointing to lose any tournament like this and especially here,” Auger-Aliassime said.

Evans will next play the winner between Spain's Pablo Carreno Busta and British qualifier Jack Draper in the last of Friday's quarterfinal matches.

Auger-Aliassime couldn't get on track despite regular urging from the near-capacity crowd. He was shanking more shots than usual and his mistakes came at critical times.

With a powerful forehand and effective two-handed backhand, Ruud was clinical in his attack and relentless with pressure. Auger-Aliassime was forced to his heels and had to settle for a defensive style.

The Canadian gave up two quick breaks in the second set before finally holding serve to get to 1-4.

“To right away lose my service game, then another one â€¦ from three-love, it really felt like the worst possible outcome today,” Auger-Aliassime said. “At that point it gets really tough.

“I tried my best, but he was also getting more and more comfortable and confident, so then things get much more difficult.”

Earlier in the day, Hurkacz took advantage of two double-faults by Kyrgios early in the third set for the first service break of their match. He rolled from there to end the Australian's nine-match winning streak.

“Nick is a super opponent, he can make every single shot,” Hurkacz said. “He doesn't really have that many weaknesses, if any. I was just trying to serve (well) and stay aggressive.”

There was no wasted energy from Kyrgios, who played like he had a cab waiting outside the venue.

He'd usually bounce the ball just once and go right into his service motion. The pace of play agreed with Hurkacz, a six-foot-five right-hander who matched the Australian's power game.

Both players had break opportunities but tiebreakers were needed to settle the first two sets.

Kyrgios, who dispatched defending champ and world No. 1 Daniil Medvedev in the second round, slowed in the third set and his serve lost some of its zip.

“I'm not a machine, I'm a human,” Kyrgios said. “My knees were sore, my back was sore, my abdominal (area) was sore. I was trying to stay moving, but I just stiffened up.”

Kyrgios entered play with wins in 15 of his last 16 matches, with the only defeat coming to Novak Djokovic in last month's Wimbledon final.

The semifinals are set for Saturday and the final of the US$6.57-million tournament goes Sunday. The winner will earn just over $915,000.

This report by The Canadian Press was first published Aug. 12, 2022.