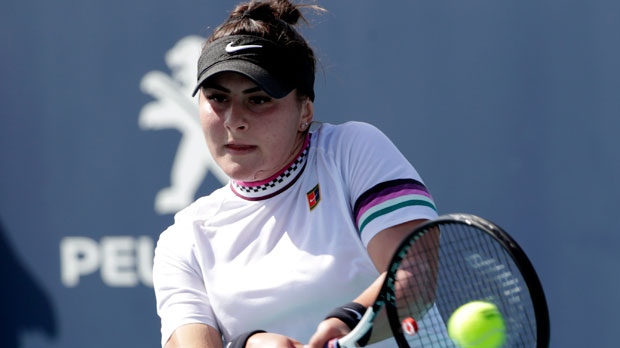 MIAMI -- Canada's Bianca Andreescu has exacted revenge on one of the three women to beat her in the 2019 season.

The 18-year-old from Mississauga, Ont., won her ninth consecutive match on Friday, beating No. 32 seed Sofia Kenin of the United States 6-3, 6-3 in a second-round contest at the Miami Open.

Kenin was the last player to beat the 24th-ranked Andreescu, prevailing in a three-set semifinal in Acapulco, Mexico on March 1.

Since then, Andreescu has captured the BNP Paribas Open title in Indian Wells, Calif., and won two more matches in Miami. She is now 30-3 during the 2019 season.

Friday's match lacked the drama of Andreescu's previous three outings -- all of which were three-set, two-plus-hour contests. She was coming off a thrilling win over Romania's Irina-Camelia Begu in which Andreescu trailed 6-3, 5-1.

Andreescu and Kenin both struggled with their first serves, with the Canadian breaking the American three times in the first set to win it.

Andreescu recorded another three breaks in the second set. Kenin double-faulted on the final point of the match, Andreescu's third match point.

Andreescu got in 55 per cent of her first serves, as compared to just 40 per cent for Kenin. Both players had six double-faults.

Kenin is familiar to Canadian tennis fans after her earlier win over Andreescu, along with a run to the ASB Classic doubles title with Eugenie Bouchard of Westmount, Que., in New Zealand in January.

On the men's side in Miami, Milos Raonic has advanced to the third round without playing a single point.

The No. 12 seed from Thornhill, Ont., won by walkover against Maximilian Marterer on Friday as the German retired before the second-round match.

Raonic received a first-round bye as a seeded player.

The Canadian will play No. 19 seed Kyle Edmund of Great Britain in the third round. Edmund beat Ilya Ivashka of Belarus 6-4, 1-6, 6-3 on Friday.

Montreal's Felix Auger-Aliassime squared off with No. 29 seed Marton Fucsovics of Hungary later Friday in a second-round match.

No. 20 seed Denis Shapovalov of Richmond Hill, Ont., is slated to face Daniel Evans in a second-round match, likely on Saturday.