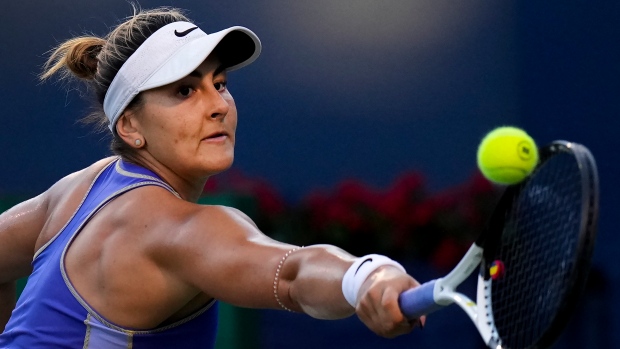 Bianca Andreescu, of Canada, returns the ball against Qinwen Zheng, of China, during the National Bank Open tennis tournament in Toronto on Thursday, August 11, 2022. THE CANADIAN PRESS/Nathan Denette

TORONTO - Canada's Bianca Andreescu lost to China's Zheng Qinwen 7-5, 5-7, 6-2, as she was eliminated from the National Bank Open on Thursday.

Andreescu, from nearby Mississauga, Ont., was the last Canadian playing in the women's tennis tournament.

Felix Auger-Aliassime is the only Canadian left in the men's event in his hometown of Montreal.

Zheng will play Karolina PliÅ¡kova of the Czech Republic on Friday in the WTA tournament's quarterfinal.

It was the first time the 53rd ranked Andreescu had played world No. 51 Zheng.

Andreescu won the 2019 edition of the event when it was last held in Toronto, earning the victory after all-time great Serena Williams retired from the match due to injury.

Trailing 5-4 in the first set, Andreescu dropped a volley well out of Zheng's reach to go up 40-0 in the match's 10th game. The smart play drew loud cheers from the partisan crowd at Sobeys Stadium and then Andreescu's first ace of the match tied the set 5-5.

A Zheng ace made it 6-5 and then, after a lengthy rally, the Chinese player used an overhead smash to win the set 7-5.

Andreescu made the most of her home court advantage, egging the crowd on after critical points in the second set.

She pumped her fist and yelled after Zheng's return on game point was well past the baseline. Then Andreescu threw her hands up, encouraging fans to cheer when Zheng's return was long on set point.

That momentum did not carry into the third set, with Andreescu quickly falling behind 3-1.

Although Andreescu won a game point, earning her chants of “Let's go Bi-bi!” she gave up three break points as Zheng took a 4-2 lead. A hard forehand smash to the opposite court by Zheng added to that advantage.

Zheng put the match away on a double break point when Andreescu charged the net and the 19-year-old Chinese player put the ball deep but in.

World No. 1 Iga Swiatek of Poland was stunned by Brazil's Beatriz Haddad Maia 6-4, 3-6, 7-5 earlier in the day. The unseeded Haddad Maia had already upset 13th-seeded Leylah Fernandez of Laval, Que., on Wednesday.

Haddad Maia will face the winner of the Round of 16 match between Belinda Bencic and Garbine Muguruza in a quarterfinal on Friday.

Serving was an issue for Swiatek with nine double faults to Haddad Maia's one. The top-ranked player from Poland said that the swirling gusts in the bowl-shaped stadium were an issue for her.

“Right now it's hard to say if it was more her game or the wind that really messed up my first set,” said Swiatek, who was playing Haddad Maia for the first time. “I think she just used the conditions better than me.

The wind was also a factor in Coco Gauff's win in the afternoon. The American moved on to the quarterfinals with an entertaining and error-filled 7-5, 4-6, 7-6 (4) win over Aryna Sabalenka.

Both players struggled with the conditions at Sobeys Stadium, with Sabalenka committing 18 double faults and Gauff hitting into 15. Sabalenka had 42 unforced errors overall, while Gauff had 32.

Later, seventh seed Jessica Pegula of the United States came back from a set down to defeat defending champion Camila Giorgi of Italy 3-6, 6-0, 7-5.

Pegula saved match point to tie the third set 5-5, then broke to take the lead on Giorgi's sixth double fault of the match. Pegula served to love in the final game to move on to the quarterfinals.