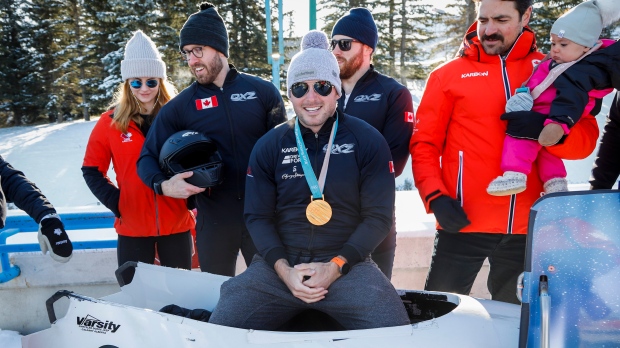 Justin Kripps, centre, Olympic bobsleigh champion, and other bobsleigh, skeleton and luge athletes gather at the finish line of the Olympic Track in Calgary, Alta., Thursday, Oct. 10, 2019, in an effort to showcase the positive impact the facility has had on the city, province and country. THE CANADIAN PRESS/Jeff McIntosh

CALGARY - Canadian bobsled pilot Justin Kripps would normally be shaking off rust and testing equipment on Calgary's sliding track at this time of year.

The 2018 Olympic champion is instead watching video of his previous races to get his brain in the game.

Calgary's 33-year-old track built for the 1988 Winter Olympics has been the home base of the national bobsled, skeleton and luge teams for three decades.

It closed in March and remains shuttered until there's money to pay for a $25-million renovation.

“For the last 13 years I've been on this track at this time of year, always the first or second week of October and always here in Calgary,” Kripps said.

“It's almost like a glimpse of retirement. You're not bobsledding and there's snow on the ground.”

Uncertainty over if and when Calgary's track will be operational again brought several past and present Olympians to its finishing dock Thursday.

They expressed concern and frustration about the future of sliding sports in Canada. The track's closure is already impacting athletes.

One of the reasons Kim McRae retired this year was because the two-time Olympic luger felt she couldn't combine nursing school with the extra travel she would have to do without the use of the Calgary track.

Young Calgary lugers Tora Yacey, 15 and Oli Gionet, 14, will also travel more this winter and spend more time away from the National Sport School to train at other tracks.

The federal and provincial governments committed $17 million to Calgary's track overhaul. WinSport has yet to find the remaining money.

WinSport oversees the 1988 legacies at Canada Olympic Park and jointly co-funds the Olympic Oval with the University of Calgary.

“There is no plan to take down the track,” Heck said Thursday. “We remain fully committed and will work on this until it becomes a non-possibility.”

An application has been made to the Investing in Canada Infrastructure Program to get the funds, he said.

Calgary's track is a regular stop on the World Cup sliding circuits bringing international athletes to the city, but not this winter.

The 2021 world luge championship that was to be held in Calgary has already been shifted to Whistler, B.C.

Canadians have won a combined eight Olympic medals in bobsled and skeleton since 1988, including four gold.

Canada's lugers claimed Olympic medals for the first time in 2018 with a relay silver and Alex Gough's bronze.

Calgary's urban track on the city's west end - built at a cost of $18.8 million in the 1980s - is unique in the world because most international tracks are located in remote mountain resorts.

Athletes say proximity to post-secondary education, employment and an international airport make it a preferable training base over Whistler, where accommodation is expensive and an airport is a two-hour drive away.

“So many international athletes come here and train and spend money in the Calgary economy,” Kripps said. “Whistler, it's just not feasible to stay in a ski chalet for two months.”

Whistler lacks Calgary's ice house built in 2001 so sliders can train starts and pushes in the off-season, nor does Whistler have a nearby 100-metre indoor sprint track.

Calgary's population base of over a million has provided much of the sliding teams' talent over the years.

Skeleton racer Lanette Prediger is an urgent care physician who gets runs in at the Calgary track after her shift.

“It's accessible to everybody,” Prediger said. “I can't see how I'd be able to get the number of training runs and volume that I need without being able to come here after work.”

WinSport pays for the upkeep of the Olympic legacies using both interest from endowment funds invested in 1988 and revenue generated by those facilities.

Replacing the refrigeration unit is the centrepiece of the planned renovation. A 72-metre section at the top of the track is already being demolished as part of the renovation.