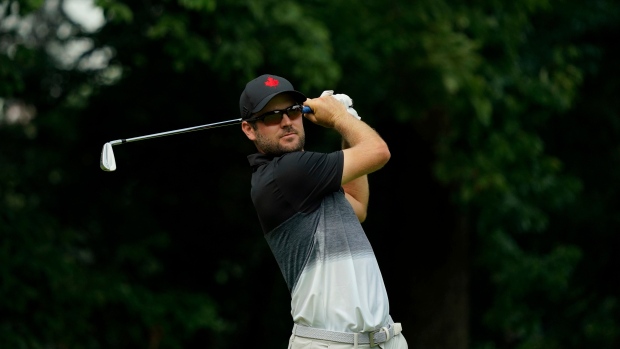 Canada's Corey Conners watches his tee shot on the fourth hole during the first round of the men's golf event at the 2020 Summer Olympics on Wednesday, July 28, 2021, at the Kasumigaseki Country Club in Kawagoe, Japan. (AP Photo/Matt York)

KAWAGOE, Japan -- Canada's Corey Conners fired a 6-under 65 round on Sunday to finish 13th at the Tokyo Olympics.

Conners, from Listowel, Ont., finished five shots back of winner Xander Schauffele from the United States.

The Canadian had four birdies apiece on the front and back nine, but also had a disappointing bogey in each.

"I would have liked to have got a few more birdies to fall on the front nine," said Conners, who added that the ninth hole was a highlight as he hit a four-iron out of a fairway bunker to within 12 feet of the pin.

"I was able to convert that for birdie and it gave me some good mojo for the back nine."

Sitting at 3 under after nine holes in Sunday's fourth round, Conners tried to get more aggressive to finish the day strong and reel in the leaders.

"I was trying to press a little bit to make as many birdies as I could and really gave myself some decent chances," said Conners, who said he was really disappointed when he had a bogey on the par-5 14th hole.

Mackenzie Hughes of Dundas, Ont., shot a 4-over 75 round to drop 33 spots on the leaderboard to 50th.

"It sucked. I sucked like the whole day and, yeah, super disappointing," said Hughes. "That's all I can really say about it."

Both Canadian men struggled in the first two rounds at Kasumigaseki Country Club, but a 66 in the third round and then Sunday's 65 propelled Conners up the leaderboard.

Brooke Henderson of Smiths Falls, Ont., and Hamilton's Alena Sharp will represent Canada in the women's tournament when it tees off on Wednesday.