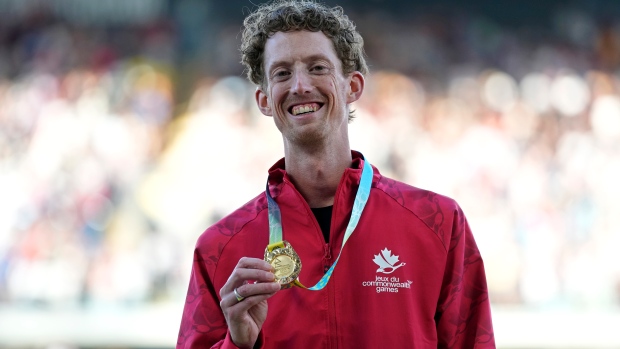 Evan Dunfee of Canada poses on the podium after winning the gold medal in the Men's 10,000 meters race walk during the athletics competition in the Alexander Stadium at the Commonwealth Games in Birmingham, England, Sunday, Aug. 7, 2022. (AP Photo/Alastair Grant)

BIRMINGHAM, United Kingdom - Canada's Evan Dunfee says he drew on the support of his loved ones to propel him to a Commonwealth Games gold medal.

The 31-year-old from Richmond, B.C., won the 10,000 metres on Sunday, using a fabulous kick over the final lap to open up a 40-metre gap on his nearest competitor.

He finished in a Commonwealth and Canadian record time of 38 minutes 36.37 seconds.

“To believe in myself today as much as my friends and family back home believed in me,” Dunfee said. “That was the goal for today, to just come in here and have that same belief as everyone else has in me, and back myself, and that's what I did and I'm thrilled.”

Dunfee's victory comes after a tough season that saw him struggle with a nagging hamstring injury and lack of motivation largely around the elimination of the 50-kilometre event, in which he won bronze at both last summer's Toky Olympics and the 2019 world championships. Dunfee had lobbied fiercely to keep the event, but it was eventually scrapped from the world and Olympic programs.

Sunday's race was a huge change of pace for Dunfee, since it was held on the track inside Alexander Stadium. Race walkers normally compete on road courses.

“That was amazing, to come out here, be in the stadium, we've never experienced anything like this as race walkers,” he said.

Canada's women's beach volleyball duo of Sarah Pavan and Melissa Humana-Paredes played for gold later Sunday on the penultimate day of the Games.

This report by The Canadian Press was first published Aug. 7, 2022.