Canada's Felix Auger-Aliassime advances to second round at Australian Open 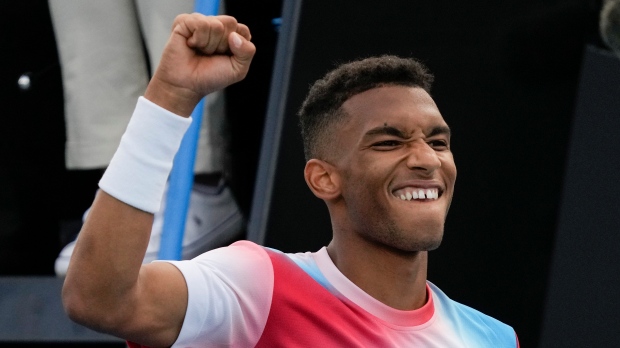 MELBOURNE, Australia -- Canada's Felix Auger-Aliassime is moving on to the second round at the Australian Open after beating Finland's Emil Ruusuvuori 6-4, 0-6, 3-6, 6-3, 6-4.

This is the third appearance in Melbourne for the ninth-seeded 21-year-old from Montreal.

He made it to the fourth round of last year's Australian Open before losing to Russian Aslan Karatsev.

Earlier in the day, fellow Canadian Leylah Annie Fernandez once again came up short at the tournament.

Fernandez lost to Australian wild card entry Maddison Inglis 6-4, 6-2 on Tuesday in the first round of the Grand Slam tournament.

It's the third straight year that the 19-year-old Fernandez, who was runner-up to Emma Raducanu at last year's U.S Open, has lost in round one at Melbourne Park.

Ranked No. 24 in the world, Fernandez had 30 unforced errors and only eight winners, and was broken three times.

For Inglis, it was a first win in a Grand Slam main draw. She lost in the first round at last year's Australian Open to then defending champion Sofia Kenin.