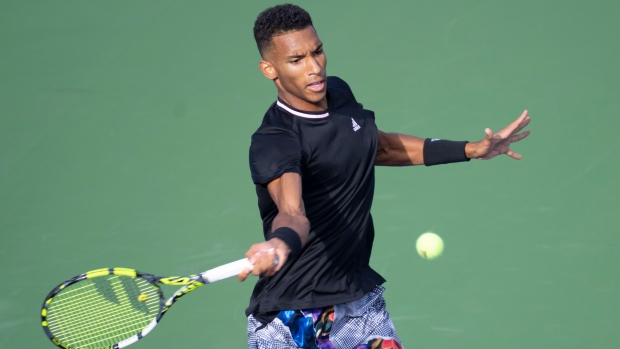 Canada's Felix Auger-Aliassime returns to Cameron Norrie of Great Britain during round of sixteen play at the National Bank Open tennis tournament, Thursday, August 11, 2022 in Montreal. THE CANADIAN PRESS/Paul Chiasson

Cameron Norrie had no answer for it and then watched his own service game fall apart.

The sixth-seeded Auger-Aliassime fired 15 aces in a 6-3, 6-4 victory over the ninth-seeded Brit to earn a quarterfinal berth at his hometown tournament.

“That was a very convincing win,” Auger-Aliassime said. “I served really well but I felt like I was also putting a lot of pressure on him at every opportunity that I had.”

Norrie buckled in his final service game with three double-faults.

With the clouds cleared after a mid-afternoon storm, the left-hander had to deal with the blinding late-afternoon sun right in his toss sightline at 4-4. It led to struggles at a most inopportune time.

Auger-Aliassime took full advantage with a rather easy break before serving things out for the victory in 72 minutes.

“I got a bit lucky,” he said. “He can hit double-faults, but I've never seen him hit three double-faults in a game like that. That was a bit fortunate.”

Auger-Aliassime posted a first-serve percentage of 85 per cent. Norrie did not record an ace and landed just 73 per cent of his first serves.

Auger-Aliassime and Ruud are the two highest seeded players remaining in the draw. Top-seeded Daniil Medvedev of Russia, No. 2 Carlos Alcaraz of Spain and No. 3 Stefanos Tsitsipas of Greece all lost their opening matches on Wednesday at IGA Stadium.

Norrie beat the Montrealer in the semifinals last week in Los Cabos, Mexico for his first victory over Auger-Aliassime in five tries on the ATP Tour.

“It was very positive for me against a player of his calibre to be able to get back to winning ways against him,” Auger-Aliassime said.

There was a clear home-court advantage this time around. The crowd let out a roar as soon as Auger-Aliassime was pictured on the stadium screens for his walk through the tunnel to centre court.

The last Canadian remaining in the field at the Masters 1000 event, Auger-Aliassime applied pressure with Norrie serving at 3-4 in the opener. He came to the net at 30-30 and made a series of volleys that had the Brit running from side to side.

Auger-Aliassime earned a break point and delivered an emphatic fist pump to the crowd's delight. Norrie was long on the next rally and the Canadian served it out for the set.

Gael Monfils, the No. 17 seed from France, retired early in the second set of his match against British qualifier Jack Draper. Monfils, who trailed 6-2, 0-2 at the time, received treatment in the right ankle area but couldn't continue.

The Ruud-Bautista Agut match was completed over four hours after its initial start time. A rain delay stopped play for just over an hour.

The US$6.57-million tournament continues through Sunday.