Canada's Fernandez draws into bracket with world No. 1 Swiatek at National Bank Open 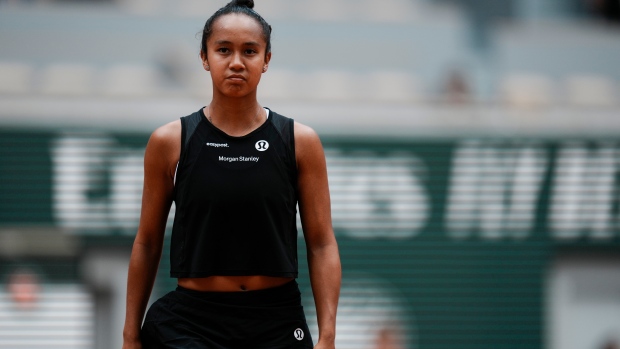 Canada's Leylah Fernandez walks to the baseline to serve against Italy's Martina Trevisan during their quarterfinal match at the French Open tennis tournament in Roland Garros stadium in Paris, France, Tuesday, May 31, 2022. (AP Photo/Thibault Camus)

TORONTO - When Leylah Fernandez's name was drawn into the same bracket as world No. 1 Iga Swiatek for the upcoming National Bank Open a mischievous smile played across the top-seeded Canadian's face.

The 19-year-old from Laval, Que., leaned forward in her chair and caught the eye of the top-seeded Swiatek.

“Hi,” said Fernandez on Friday, getting laughs from the crowd assembled on the observation deck of the CN Tower for the WTA event's draw ceremony.

The women's side of the National Bank Open will be held at Toronto's Sobeys Stadium starting with Saturday's qualifying round.

Fernandez will face a qualifier in the tournament's first round on Monday, while Swiatek has a bye thanks to her high seeding. The 13th seeded Fernandez hasn't played since sustaining a right foot injury in the quarterfinals of the French Open.

The Canadian said she finally got the official green light to play again from her doctor the day before the draw ceremony after weeks of training.

“The timing is impeccable,” said Fernandez. “We've been trying extremely hard to get back into shape as quickly as possible.

“But we still needed that doctor's opinion saying that I am good to go.”

Although Fernandez was playful about being in the same bracket as Swiatek, there's no taking the Polish player lightly.

Swiatek set a new record for the longest match win streak in the 21st century, winning 37 matches in a row earlier this year. She won the French Open and four WTA 1000 titles over that span.

That win streak catapulted Swiatek to the top of the WTA standings. She noted that she has come a long way since she was a qualifier at the 2019 edition of the Canadian event when it was still called the Rogers Cup.

“Adjusting to this position was pretty weird because when I was younger, I didn't really believe that it actually was going to happen,” said Swiatek, who had to leave the draw ceremony early to go train. “And it happened really quickly.”

Fernandez will be joined by at least four other Canadians at the tournament.

Bianca Andreescu of Mississauga, Ont., will face 11th seed Daria Kasatkina of Russia in the first round. Vancouver's Rebecca Marino is scheduled to play China's Qinwen Zheng, Carol Zhao of Richmond Hill, Ont., will meet Amanda Anisimova of the United States, and Toronto's Katherine Sebov will take on Yulia Putintseva of Kazakhstan.

More Canadians are entered in this weekend's qualifying tournament and could earn their way into one of four spots in the main event's first round.

“Every year you get to see one new player, one more young player who's going to surprise people,” said Fernandez of the depth of the qualifying rounds. “You always hope that player is going to do something great in their next year or the year after.”

All-time tennis great Serena Williams of the U.S. is also in the same bracket as Fernandez and Swiatek. The 40-year-old 23-time Grand Slam winner will face a qualifier in the first round.

Venus Williams, her 42-year-old sister, will take on Switzerland's Jil Teichmann in the first round. The elder Williams has won seven Grand Slam titles.

“There's so many great champions in the draw, it's just going to be an exciting week,” said Fernandez.

This report by The Canadian Press was first published Aug. 5, 2022.