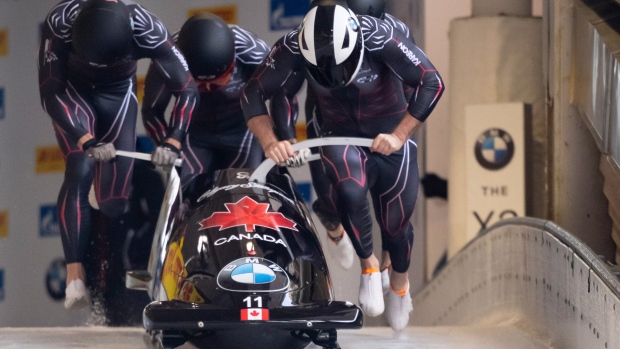 Kripps, from Summerland, B.C., captured his fifth international two-man medal on the track Saturday when he and Cam Stones of Whitby, Ont., celebrated the silver. But the Canadian pilot had never slid onto the four-man podium in Kongissee.

Kripps and Stones completed the double-medal weekend while teaming up with Ryan Sommer of White Rock, B.C., and Saskatoon's Ben Coakwell to clock two third-place runs and secure the bronze with a time of one minute 37.29 seconds.

“There have not been too many times that we have been on the podium in both the two- and four-man races on the same weekend so I am really pumped with the crew,” said Kripps. “We had great starts today. I made a couple of mistakes on the second run, but it was enough to hang onto the podium, so I am really happy.”

The crew got the sled in motion with a solid 4.87 push in the second run, allowing the Olympic two-man champion to take control of the 16-corner track that spirals down the Bavarian Alps.

It is the seventh World Cup four-man medal of Kripps's career, and third this season for the Canadian crew.