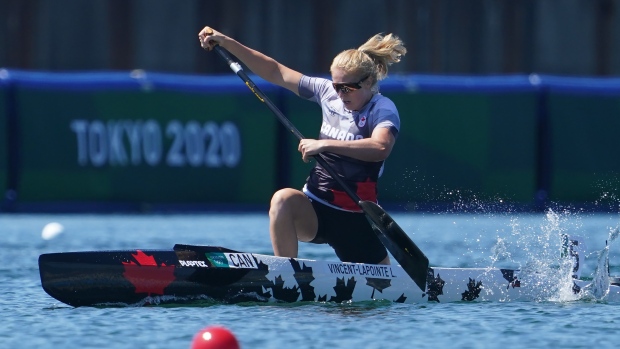 TOKYO -- Laurence Vincent-Lapointe's long, winding road to the Tokyo Olympics has led her to the podium.

The Canadian canoeist won silver in the final of the women's C-1 200-metre race at Sea Forest Waterway on Wednesday.

The 29-year-old paddler from Trois-Rivieres, Que., finished the sprint in a time of 46.786 seconds.

American Nevin Harrison took the gold with a time of 45.932, while Ukraine's Liudmyla Luzan claimed bronze.

A dominant canoeing force for more than a decade, Vincent-Lapointe had to wait for the sport's international federation and the International Olympic Committee to make room for women to race at the Olympics.

That finally happened in Japan.

But then her life and career descended into controversy.

Vincent-Lapointe had an "adverse analytical finding" in July 2019 during an out-of-competition drug test.

She was suspended and missed the 2019 world championship, but battled for reinstatement.

The International Canoe Federation cleared her to compete in January 2020, accepting that Vincent-Lapointe was the victim of third-party contamination of a banned substance.

The ICU believed her assertion that a trace amount of ligandrol was transferred to her via an ex-boyfriend's body fluids.

And while COVID-19 was a devastating gut-punch to sports and society around the world, it gave Vincent-Lapointe an opportunity to get back in the groove.

Missing the 2019 worlds, however, meant she still had to qualify for Tokyo, and the global pandemic didn't allow her to travel to North American qualifying events.

Canoe Kayak Canada declined to send paddlers to international World Cups this spring because of the pandemic, but ultimately awarded Vincent-Lapointe an Olympic quota spot following a performance review.

Next up for Vincent-Lapointe and Vincent is the women's C-2, where they are medal favourites, on Friday and Saturday.