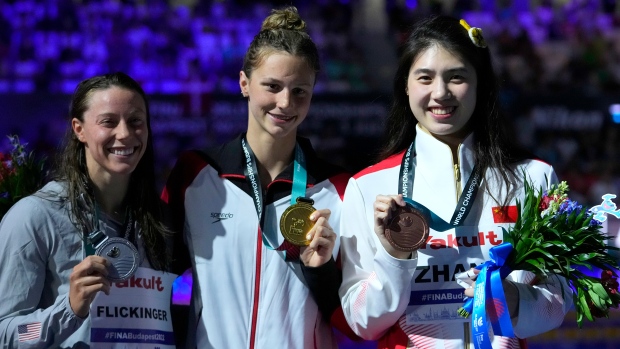 It's the first time Canada has won two gold on the same day at the world championships.

Masse, a native of LaSalle, Ont., finished first in the women's 50-metre backstroke in 27.31 seconds. It was her seventh career long-course world championship medal, tied with Toronto's Penny Oleksiak for the most by a Canadian.

“It's pretty surreal,” Masse said. “I've watched my 50 progress over the last couple of years. I've gained a lot of strength and worked a lot on my speed. I couldn't ask for anything more to get on the podium.”

McIntosh, a 15-year-old from Toronto, took gold in the women's 200 butterfly in 2:05.20 to trim over half a second from the world junior record she set in the semifinals a day earlier.

Her time established a new national record and was the fastest time in the event this year.

“`The first 50 and second 100, I definitely pushed it a little bit,” McIntosh said. “`I didn't really think much until the last 50. I just gave it my all to put all my energy and all my focus to get my hands on the wall as fast as I possibly could.”

McIntosh picked up her second medal of the day when she teamed with Oleksiak, Toronto's Kayla Sanchez and Taylor Ruck of Kelowna, B.C., to finish third in the 200 freestyle relay in 7:44.76.

“It was fun to be a part of,” said Oleksiak, the team's anchor who also swam in the women's 100 freestyle semifinals. “It was a tough double for me but having the girls really helped.”

McIntosh now has three medals at the competition, while Masse has two.

Masse, who collected silver in the 100 backstroke on Monday, finished ahead of American Katharine Berkoff (27.39) and Analia Pigree of France (27.40). Ingrid Wilm of Calgary was fourth in 27.43.

“I had a horrible touch,” Wilm said. “I know I can do better than that. You have good days and bad days.”

McIntosh has enjoyed a breakout year since her emergence at Canada's Olympic swim trials last June.

She had two fourth-place finishes at the Tokyo Games and won a gold and two silver medals at the short-course championships last December in Abu Dhabi.

Meanwhile, Oleksiak and Sanchez advanced to Thursday's final in the women's 100 freestyle.

Winnipeg's Kelsey Wog qualified fifth for the women's 200-metre breaststroke final. She clocked 2:23.82 in her semi and was the fastest in prelims at 2:24.37.

In women's water polo, Canada thumped Colombia 22-2 to move atop the standings at 1-0-1 with a goal differential of plus-20. Canada finishes group play Friday against Hungary (1-1-0).