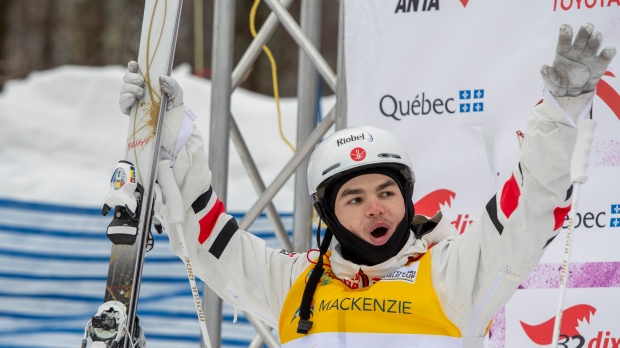 MONT-TREMBLANT, Que. - Two tenths of a point. That's all that separated Mikael Kingsbury and his long-time rival, Ikuma Horishima, in the men's moguls final at a World Cup event in Mont-Tremblant, Que., on Saturday.

The 27-year-old Kingbury successfully defended his title at Mont-Tremblant, and now has 58 career victories and 85 podiums in 103 career starts on the World Cup circuit. And, most of all, he placed ahead of Horishima - who beat the native of Deux-Montagnes, Que., by 0.4 points at a World Cup event in Thaiwoo, China, back in December.

“Without saying it felt good to get my revenge, I'm just happy I was able to remain calm at the top of the hill and follow my plan to the letter,” said Kingsbury.

Kingbury, who was the last to go in the super final, watched Horishima's performance right before it was his turn. He knew exactly what he needed to do in order to be triumphant.

“I maybe cut about a half-second on Ikuma, which to me was the difference,” said Kingsbury. “Those guys, Ikuma and Ben, elevated their game up and scored 86 points, and I noticed they both had times of 23 seconds.

“I knew I had the advantage of being the last to go, and that I would need to cut my time by half a second to move in front. So, after my first jump, I made sure to straighten my skis for about 20 metres and after that I knew I just had to maintain that rhythm all the way to the end. And that's what I did,” said the 27-year-old, whose final run clocked in at 22.46 seconds.

This victory was the third of the season for Kingsbury following the ones he earned in moguls at an event in Ruka, Finland, and the other in dual moguls in Thaiwoo. Thanks to his latest victory, Kingbury also increased his lead atop the World Cup moguls standings to 60 points, ahead of rival Horishima.

The only other Canadian moguls skier who reached the final, Gabriel Dufresne of Repentigny, Que., finished in 12th position.

A deceiving result for Justine Dufour-Lapointe

On the women's side, France's Perrine Laffont recorded her third straight World Cup victory by securing the moguls gold at Mont-Tremblant on Saturday - her fourth win in as many events on the World Cup circuit this season.

Laffont soared past all her opponents with a run of 82.14 points. She placed ahead of Kazhakstan's Yuliya Galysheva (80.99) and Russia's Anastasiia Smirnova (80.18).

Like Kingsbury, Laffont increased her lead in the World Cup standings on Saturday. With a total of 400 points in moguls, she now leads her closest competitor, Galysheva, by 218 points.

The 25-year-old Canadian, who was searching for her second podium of the season after finishing third in moguls in Thaiwoo, seemed to let her emotions briefly get the best of her.

“I don't regret anything, I gave it all I had. It wasn't easy in the final, and I knew I needed to increase my level for the super final. But once there, I skied cleaner and I executed my jumps to near perfection. So, after all that, I simply think the judges didn't want to see a Canadian on the podium today,” said Dufour-Lapointe.

“Honestly, I don't know what more they wanted,” she added in reference to the judges. “I did all I could to give the crowd what they came to see. So, I'm just really disappointed to have finished in fifth.”

Canadian Valerie Gilbert was beaming after finishing the competition in eighth, and for good reason.

“I am really happy - this is the best result of my career. All of you know that I am coming back after a sabbatical year, so I couldn't have asked for more,” said the native of Sainte-Adele, Que.

“This result seems to say: 'Watch out! Valerie is here, and she is back in the game. So be weary,”' said Gilbert with a smile.

Her compatriot, Toronto's Berkley Brown, failed to complete her run in the final after a nasty fall following her second jump, which caused her to finish 16th.

The next moguls event on the Freestyle Ski World Cup circuit will take place Feb. 1 in Calgary.