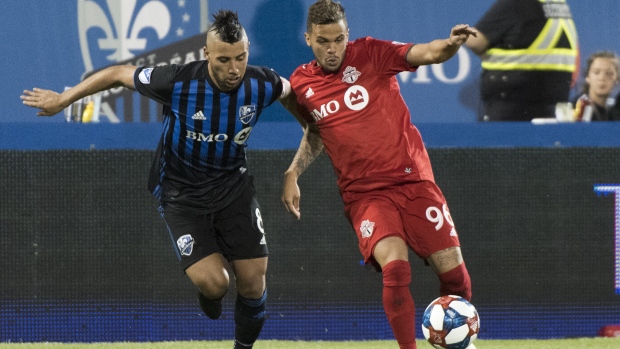 Montreal Impact's Saphir Taider, left, challenges Toronto FC's Auro during second half MLS soccer action in Montreal on July 13, 2019. Canada's three MLS teams will continue their regular season north of the border, playing each other three times in the first phase of the league's revamped schedule. THE CANADIAN PRESS/Graham Hughes

TORONTO - Canada's three Major League Soccer teams will continue their regular season north of the border, playing each other three times in the first phase of the league's revamped schedule.

With the border closed to all but essential travel due to the global pandemic, the league is having U.S. and Canadian teams stick to their side for games through mid-September.

The Vancouver Whitecaps open with a pair of matches in Toronto on Aug. 18 and 21. The Montreal Impact will then host Vancouver and Toronto on Aug. 25 and 28, respectively. The Whitecaps' first home game is Sept. 5 against Toronto.

Each team will play six games during the all-Canadian portion of the schedule, which runs through Sept. 16. The games will count in the regular-season standings.

While the league announcement made no mention of whether any fans will be allowed into the stands during the Canadian contests, Toronto and Vancouver said their games will be played behind closed doors.

Montreal made no mention of fans in its news release. Quebec currently allows gatherings of 250 people.

South of the border, some jurisdictions permit spectators.

FC Dallas allowed a limited number of fans into its game Wednesday against Nashville, with the announced crowd of 2,912 having to sign a COVID-19 waiver.

Texas guidelines allow open-air stadiums to have up to 50 per cent capacity. Dallas initially planned a maximum of 5,110 fans - just under 25 per cent - but eventually limited the number to 3,000.

The team that earns the most points against the other Canadian clubs during this section of the schedule will qualify for the 2020 Canadian Championship final - against the winner of the CPL's Island Games.

The Canadian Championship will be a one-match winner-take-all rather than the normal knockout competition. The winner will hoist the Voyageurs Cup and qualify for the next edition of CONCACAF Champions League.

“We are thrilled to continue our regular season in a very unique all-Canadian series with added incentive,” Whitecaps CEO and sporting director Axel Schuster said in a statement. “We take a lot of pride in our commitment to grow the game in Canada and see ourselves first as a Canadian team.”

The pandemic halted play March 12, some two weeks into the MLS season. Play resumed July 8 with the MLS is Back Tournament, which wrapped up Tuesday with Portland's 2-1 win over Orlando City SC.

Each of the three group-phase games at the Florida tournament counted in the regular-season standings.

The revised schedule will see each team play an additional 18 regular-season games.

The first phase sees most teams playing six matches against regional opponents through mid-September. Dallas and Nashville, both forced to withdraw from the tournament because of COVID-19, are playing an additional three games to make up for those missed at the tournament.

The return to play for the Canadian teams will see a continuation of COVID-19 testing. All players, technical and essential club staff will be tested every other day, including the day before a match.

Teams will travel by charter, and matches between Montreal and Toronto will see the visiting club arrive and leave the day of the game. The Whitecaps, however, will play their away matches on one road trip.

The league plans to announce the balance of the regular-season schedule by early September, in consultation with club, health and government officials.

The regular season will conclude Nov. 8, with the league promising to release the remainder of the schedule in early September. Eighteen clubs will make the playoffs, up from 14 last year, with the post-season running Nov. 20 to Dec. 12.