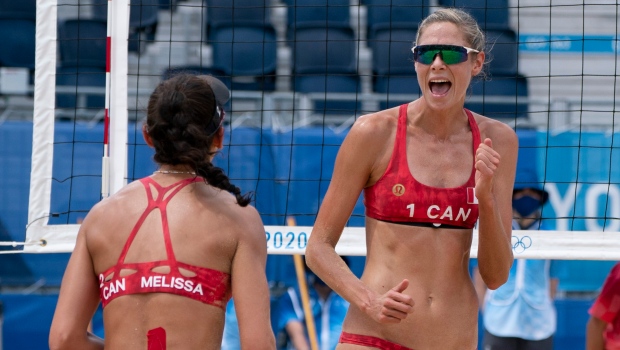 Canada's Sarah Pavan and Melissa Humana-Paredes celebrate a point during round of 16 women's beach volleyball action against Spain at the Tokyo Olympics, Monday, August 2, 2021 in Tokyo, Japan. THE CANADIAN PRESS/Adrian Wyld

TOKYO -- Trust is the foundation of defence and defence is the focal point of Melissa Humana-Paredes and Sarah Pavan's strategy in beach volleyball.

The Canadian duo dispatched Spain's Liliana Fernandez Steiner and Elsa Baquerizo McMillan 2-0 in a round-of-16 match at the Tokyo Olympics on Monday, overpowering their opponents 21-13, 21-13.

Pavan's dominant play at the net was the key to victory, but said after the match that she can't commit to blocks without knowing her partner will have her back.

"Honestly, in beach volleyball, a defensive system is all about trust," said Pavan at Shiokaze Park, overlooking Tokyo Bay. "If I don't trust Melissa I'll start trying to do too much at the net. If Melissa doesn't trust me, she'll be out of position.

Canada is the only country with two teams left in the tournament.

Toronto's Humana-Paredes and Pavan of Kitchener, Ont., will face Australia's Mariafe Artacho Del Solar and Taliqua Clancy in the quarterfinals on Tuesday.

"(Australia) runs a very varied offence, they're not traditional, they're running plays all over the place," said Pavan. "We're going to have to be really steady and stay balanced with our block defence."

That match will be held right after Heather Bansley of London, Ont., and Toronto's Brandie Wilkerson play Latvia's Tina Graudina and Anastasija Kravcenoka in their quarterfinal matchup.

"Normally at this stage there would be two Americans or two Brazilians but you're seeing two Canadians now and I think that says a lot about our program and our federation," said Humana-Paredes. "I think as a country we should be really proud of where we are."

Pavan and Humana-Paredes, the reigning world champions, have not dropped a set in Tokyo, winning all three of their pool matches 2-0.

They have been dominant since they first partnered together five years ago. They've reached the finals at 14 international events and won seven, including the 2019 world title and a 2018 Commonwealth Games gold.

That world title qualified Pavan and Humana-Paredes for the Tokyo Olympics two years ago, then the COVID-19 pandemic delayed the Games by a year.

"They're a very favoured team right now and I think they can get a medal and if not they're going to be very close," said Fernandez Steiner.

Monday's first set was tight for the first 14 points but then the Canadians began to overwhelm their Spanish opponents. Pavan in particular was dominant, getting four blocks as part of a 7-1 run that gave the Canadians a 14-7 lead.

Pavan said that success was due to lots of preparation, analyzing video of their opponents in advance of a match.

"I spend a lot of time watching the hitter's body and where the pass goes, the trajectory of the set," said Pavan. "A lot of the time I do know what they're looking for but sometimes it's about just dropping my hand in a little bit further."

The Canadians didn't let up in the second set, quickly taking an 11-4 lead.

A Humana-Paredes spike just inside the boundary line made it 20-11 before giving up two points to Spain. A return by Humana-Paredes off her opponent's fingers sealed the win for Canada.

"(Pavan) makes me look really good," said Humana-Paredes, who laughed as Pavan shook her head no. "As a hitter 100 per cent her presence makes a difference."

Canada didn't qualify a duo on the men's side of the beach volleyball event.