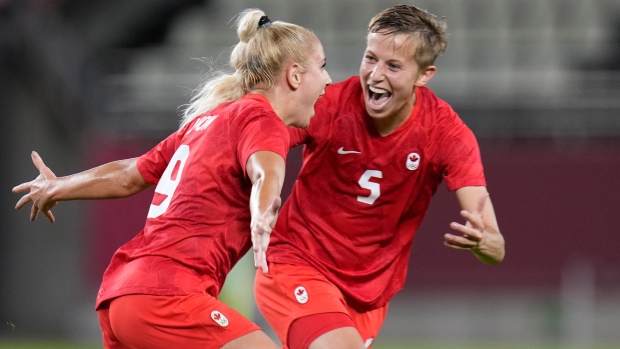 Quinn will step onto the soccer pitch Friday in Japan and make history as the first transgender, non-binary athlete to win an Olympic medal.

The Canadian women's soccer team will play Sweden for gold, with silver going to the defeated side. The Canadians have won bronze at the previous two Olympic games.

It's an achievement friends, teammates and advocates call a profound leap forward for inclusivity and reminder of the power of sport to champion equality.

"To have somebody break down that barrier ... a young kid playing a sport can say 'I want to be an Olympic soccer player because I saw Quinn do it."'

Browne, the first openly transgender player in professional hockey, came out in 2016 and says he will be watching Quinn on TV.

Browne has been friends with and corresponded with Quinn for years.

Quinn came out as transgender almost a year ago, and uses they/them pronouns. In an Instagram post last September, they wrote: "I want to be visible to queer folks who don't see people like them on their feed. I know it saved my life years ago."

The 25-year-old midfielder from Toronto joins others making headlines for inclusivity at the Tokyo games. Laurel Hubbard of New Zealand is the first openly transgender Olympic weightlifter and Alana Smith, a non-binary skateboarder has represented the United States.

Quinn won a bronze medal with the women's team in the 2016 Rio Olympic games but had not come out as transgender at that time.

Olympic hardware will be another accolade in an impressive career on the pitch. They played college soccer at Duke and worked for the campus chapter of Athlete Ally, a national organization promoting inclusivity in sport.

Quinn is the highest-drafted Canadian in the National Women's Soccer League and plays for the OL Reign.

Reign defender Lauren Barnes said Quinn has been a force at midfield and on the backline while bringing a "a goofy, competitiveness" to the squad.

"We are so proud of what Quinn has done on the pitch and can't wait to watch them compete for a medal on the biggest stage," said Barnes.

"More importantly, we couldn't be more proud of who they are off the pitch. They are a pioneer and will be an idol (and) role model to so many youth athletes.

"That legacy will live on far longer than any game of football."

Many U.S. states are looking to ban transgender women and girls from competing in women's sports, citing unfair competition and advantages.

Advocate and researcher Kristopher Wells said the pushback in the U.S. and elsewhere reflects the duality of sports.

He said athletic competition can be a beacon of equality and meritocracy but also a battleground for social and cultural opponents.

"The visibility that Quinn brings to this Olympic platform really emphasizes the very best of what sports is all about," said Wells, an associate professor and research chair for public understanding of sexual and gender minority youth at MacEwan University in Edmonton.

"Sports has often been considered the great equalizer in society, but it hasn't quite lived up to that promise," he added.

Wells noted many LGBTQ youth still drop out of organized team sports early because of intolerance.

"Sports has often been called one of the last bastions of tolerated homophobia in our society, so the more we see LGBTQ athletes not only participating but standing on the Olympic podium receiving medals, it's quite a significant moment."

Browne said it's not just the spotlight moments surrounding Quinn, but the less obvious -- but nonetheless critical changes -- such as Olympic announcers using they/them pronouns.

Browne, who identifies as male, says he was ready to quit hockey before he came out.

"Just being able to be yourself and not having to hide behind a mask takes such a weight off your shoulders and you feel like you can just simply focus on the sport."