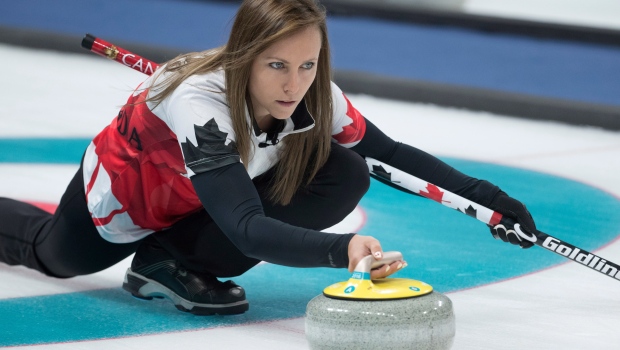 GANGNEUNG, Korea, Republic Of -- Canada's Rachel Homan earned her first victory at the Winter Olympics on Saturday with an 11-3 victory over Nina Roth of the United States.

Homan was in desperate need of a win after opening round-robin play with three straight losses at the Gangneung Curling Centre.

Her Ottawa-based team stole three points in the first end and didn't look back.

Roth flashed a stone in the opening end and was light with her final throw. A hog-line violation followed in the second end as the Americans continued to struggle, eventually being forced to a single.

Homan delivered an open hit for one in the third end and tacked on three more points in the fifth. The teams shook hands after Canada scored four points in the seventh.

Firing at a 92 per cent clip at the mid-game break, Homan and teammates Emma Miskew, Joanne Courtney and Lisa Weagle were all smiles as they chatted near the team bench.

Their throws were tentative the day before in a stunning upset loss to Denmark. Their communication was off and their body language spoke volumes.

The pressure is always immense for Canadian rinks at major international competitions and Homan, an Olympic rookie, looked like she was feeling it in her first three losses.

You wouldn't know it by the way her team came out firing in the opening end. The Homan rink threw eight quality stones in a row and took advantage of Roth's errors.

Those American miscues gave the Canadians a much-needed break.

Against Denmark, Homan was playing like a golfer with the yips. Against the U.S., it was vintage Homan.

Pinpoint accuracy, confident throwing, and a renewed energy. Homan was playing to win and got the victory she needed.

Next up for Canada is a Sunday afternoon matchup against Switzerland's Silvana Tirinzoni. Round-robin play continues through Wednesday and the medal games are set for next weekend.