Canada's Shapovalov upset by Fucsovics in first round of Australian Open 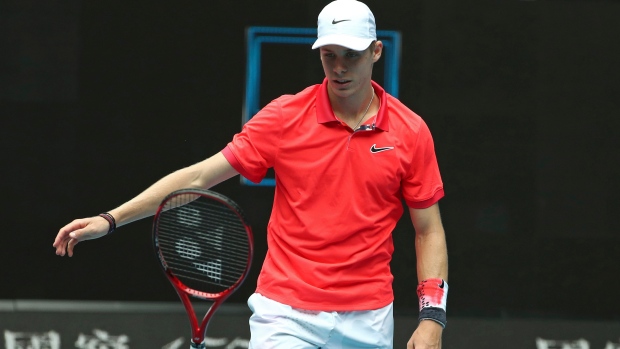 MELBOURNE, Australia - Canada's Denis Shapovalov lost a lengthy four-set match with Hungary's Marton Fucsovics on Monday in the opening round of the Australian Open.

Shapovalov, from Richmond Hill, Ont., entered the tournament as the 13th seed, his highest-ever seed at a Grand Slam event.

It was the first time Shapovalov and Fucsovics, ranked 67th on the ATP Tour, had played.

Fucsovics has played spoiler at the Australian Open before, stunning 13th seed Sam Querrey of the United States in 2018.

“Usually this is not a lucky number, but for me, (13 is) my favourite number,” said Fucsovics. “I played some of my best tennis today. Everything was working well.”

Fucsovics took an early 2-0 lead in the first set, using a deft touch on returns to work Shapovalov out of position.

Although Shapovalov won the next game, Fucsovics continued to press and took the opening set 6-3.

After looking rattled throughout the first set and in the first game of the second, Shapovalov started to find his game. He shouted in celebration as the Hungarian's return fell short to tie the second set 1-1.

Shapovalov slammed his racket to the ground in frustration as Fucsovics took a 40-0 advantage with the second set tied 2-2. The outburst came after Shapovalov's 24th unforced error.

An emotional Shapovalov yelled “come on!” to himself after powering a forehand past a running Fucsovics to tie the set up 3-3. The duo traded games twice to keep it even at 5-5.

Shapovalov again threw his racket to the ground when his return went too deep, giving Fucsovics the advantage. On the next serve, Fucsovics won the game.

After a lengthy rally, Fucsovics sailed a return wide, giving Shapovalov an 8-7 lead and an opportunity at set point. Fucsovics double faulted for only the second time in the match to give Shapovalov the set.

Still struggling with his emotions, Shapovalov quickly fell behind 5-1 in the third set. As Shapovalov continued to lose his composure, he double faulted to hand Fucsovics the set point.

Shapovalov berated the umpire and received a code violation after the third set on Margaret Court Arena.

After throwing his racket, Shapovalov was given the code violation that triggered his outburst.

“I didn't break it. If I break it, 100 per cent code me,” Shapovalov yelled at umpire Renaud Lichtenstein. “You're not doing your job. You're just finding reasons to code me.”

Shapovalov jumped out to 2-0 and 3-1 leads in the fourth set but Fucsovics battled back to tie it 4-4 and take a 5-4 lead before Shapovalov evened it 5-5.

Fucsovics sliced a backhand just out of Shapovalov's reach to take a 4-2 lead in the tiebreak after the Canadian had played close to the net to try and force play.

Shapovalov won a point back before Fucsovics put the match away to complete the upset.