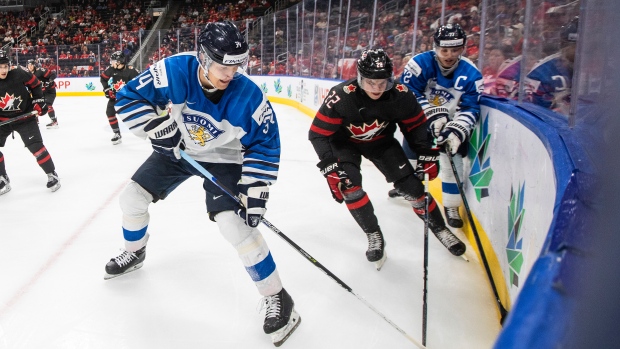 EDMONTON - Ridly Greig was a little banged up after helping Canada to a big win at the world junior hockey championship on Monday.

Not only did the Ottawa Senators' prospect score and contribute an assist in the 6-3 victory over Finland, he blocked some big shots when the Canadians ran into third-period penalty trouble.

Special teams were the difference maker on Monday, with the Canadians going 2-for-2 on the power play while Finland was 1-for-5.

The Finns got their second stretch of five-on-three hockey with less than five minutes left on the clock when William Dufour joined Ethan del Mastro in the penalty box.

Finland pulled goalie Leevi Merilainen just as del Mastro's penalty expired and with the extra man Roby Jarventie put a puck in off the glove of Canadian goalie Dylan Garand to make it 5-3.

Dufour sealed the score at 6-3 with an empty-net strike 18:13 into the third.

The Finns had a prime opportunity to eat into Canada's lead with a minute-long two-man advantage midway through the final period.

Donovan Sebrango was sent to the box for high-sticking and less than a minute later, teammate Will Cuylee was tossed from the game for a knee-on-knee hit.

Canada weathered being down two men, then chewed through the four remaining minutes of the major penalty without conceding a goal.

“I thought our penalty kill was elite today, so many guys blocking shots. And that's a great sign for a team that's trying to win something,” said Canada's captain Mason McTavish, who had a goal and two assists in the win.

“Finland, they're a great team. I think they were 3-0 coming into this, their power play is ridiculous. So the fact that our PK stood up there with one of the best power plays in the tournament is huge for us.”

Connor Bedard scored and contributed an assist for Canada (4-0-0), while Dufour, Brennan Othmann and Tyson Foerester also found the back of the net. Olen Zellweger tallied three assists.

Joakim Kemell scored and contributed an assist for Finland (3-1-0) and Samuel Helenius rounded out the scoring.

Canada's Garand made 22 saves and Merilainen stopped 31 of 36 shots for the Finns.

The result was an important one for Canada, who finished the preliminary round atop Group A. They'll face Group B's Switzerland (1-3-0) in the quarterfinals on Wednesday.

Switzerland clinched its spot in the quarterfinals earlier on Monday with a 3-2 win over Austria (0-0-4).

“It was OK but it wasn't enough. And we were angry after the game, that's for sure,” he said.

A big goal early in the third whittled the Finns' deficit to 5-2.

Toronto Maple Leafs' prospect Topi Niemela fired a shot from the point and Kemell tipped it in from the slot for his third goal of the tournament.

Canada called for a coach's challenge, arguing that the puck had gone off the netting before falling back to the ice ahead of the goal.

“The guys on the ice are generally the ones who can tell you what's going on,” said head coach Dave Cameron. “My players were 100 per cent sure it went in (to the net). So you trust your players.”

After an extended video review, officials determined the goal was good. The Canadians did not receive a delay-of-game penalty because officials said the review was “inconclusive.”

The Canadians dominated the middle frame, outshooting the Finns 20-5 and taking a 5-1 lead.

McTavish gave his country its second power-play goal of the game 16:17 into the period after Finland's Rubin Rafkin was called for interference.

Zellweger sent the Anaheim Ducks' prospect a pass from inside the blue line and McTavish uncorked a one-timer that flew over Merilainen's shoulder stick side.

Thirty-one seconds into the second, Canada went up 4-1 after the Finnish goalie bobbled a shot by Joshua Roy.

Greig slid in on one knee to put the rebound in the back of the net with his third goal of the tournament.

Canada went into the first intermission up 3-1 after a late Finland goal.

A knot of players battled for the puck behind the Canadian net and Finland's Kalle Vasisanen came up with it. He sent a pass to Helenius at the high hash marks and the L.A. Kings' prospect got a shot up and over Garland's shoulder with 57 seconds left in the period.

Bedard put away his third goal of the tournament in memorable fashion 17:19 into the first.

Canada was penned in its own zone for an extended period, but the 17-year-old phenom showed no signs of exhaustion when he collected a cross-ice pass from McTavish at the blue line and sped into the faceoff circle.

He then ripped a blistering shot past Merilainen, pinging the puck off the inside of the crossbar to make it 3-0.

A power-play strike boosted Canada's lead to 2-0 midway through the opening frame after Helenius was called for slashing.

Greig's shot ricocheted off Merilainen's pad but Foerester was in position to poke the rebound in from the top of the crease as he slid past the net.

Finland got off to a strong start, outshooting the host nation 4-0 across the first five minutes of the game.

It was Canada that opened the scoring, though, 6:21 into the first.

Defenceman Zellweger fired a long bomb from inside the blue line and Othmann batted it in past Merilainen.

The play was reviewed for a potential high stick but the goal - Othmann's second of the tournament - was determined to be good after officials reviewed the video.

Finland will also play in the quarterfinals but must wait for the outcome of Monday's late game between Group B's Sweden (2-0-1) and Germany (2-0-1) to learn its opponent.

The winner of that game will battle Latvia (1-2-1) in the quarterfinals on Thursday. The loser will face Finland.

The reigning champion Americans (4-0-0) also went undefeated in round-robin action and will play Czechia (1-2-1), the country commonly known as the Czech Republic, in the quarterfinals.

The semifinals are scheduled for Friday and the medal games will go Saturday.

NOTES: McTavish leads the tournament in scoring with 13 points (seven goals, six assists). â€¦ Canada outscored its opponents 27-7 in the preliminary round. â€¦ The 2022 tournament is being played in August after the original event was called off on Dec. 29 after just four days as rising COVID-19 cases among players and officials forced games to be forfeited.

This report by The Canadian Press was first published Aug. 15, 2022.