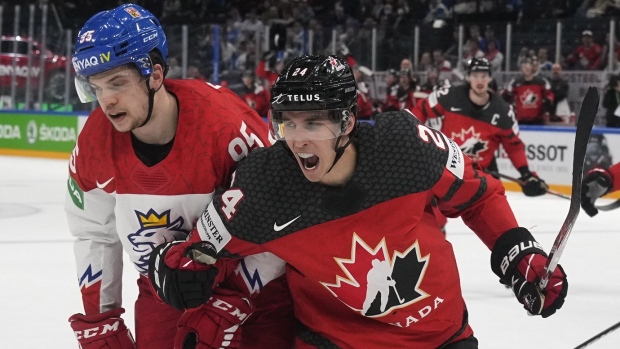 Canada's Dylan Cozens celebrates his goal during a match between the Czech Republic and Canada in the semifinals of the Hockey World Championships, in Tampere, Finland, Saturday, May 28, 2022. Cozens scored twice to lead Canada to a 6-1 win over Czechia in semifinal play Saturday at the world hockey championship. THE CANADIAN PRESS/Martin Meissner

TAMPERE, Finland - Canada and Finland won semifinal games Saturday to set up a third straight gold-medal showdown between the teams at the IIHF world hockey championship.

Finland won gold in 2019 in Slovakia, the 2020 tournament was cancelled due to the pandemic and Canada won gold last year in Latvia. This time around, Finland will have home ice for Sunday's championship match at the Nokia Arena.

“We know the building is going to be rocking and the Finns are playing for gold at home,” said Canadian forward Dylan Cozens. “But we need to try to have a strong start and not let (Finland) build momentum from their fans.”

Cozens had two goals and an assist in Canada's 6-1 victory over Czechia. Finland edged the United States 4-3 in the other semifinal.

Canada pulled away by scoring three goals in a span of three minutes 19 seconds midway through the second period. Kent Johnson's goal was sandwiched between power-play goals by Adam Lowry and Matt Barzal.

“The Czechs have been good on the penalty kill all tournament and we were able to capitalize on a few power plays tonight,” said Canadian head coach Claude Julien. “We are going to take some time and study Finland's penalty kill, and hopefully come up with a solution for it like we were able to do against the Czechs.

“We know Finland is strong on special teams and because of that we are expecting a tough game tomorrow night.”

David Krejci opened the scoring for Czechia and Cozens tied the game late in the first period. Drake Batherson had two assists.

“We came here to win,” Canadian defenceman Ryan Graves said. “We take pride in our hockey. As Canadians, hockey's in our blood so I know everyone back home is rooting for us to get gold.

“It's an honour to play for your country and that's the whole reason we come over here.”

Cole Sillinger had an insurance goal for the Canadians, who outshot Czechia 35-26. Canadian netminder Chris Dreidger made 25 saves.

“Tomorrow in front of the (Finnish fans), there is going to be some adversity and we are going to need to battle through it,” said Canada forward Pierre-Luc Dubois. “We have a lot of confidence in ourselves and we know what we are capable of.”

The Americans will play Czechia for bronze on Sunday.

The Finns won their first Olympic title this year in Beijing.

“It's special,” defenceman Mikko Lehtonen said. “At the moment, it's always one game. It's a final. It doesn't matter who you play, but in front of the home fans, it's always special for us.”

“It's definitely a tough one,” Farrell said. “We battled as hard as we could, but they're a really good team and they ended up coming out on top. We've just got to refocus and be ready to battle for a bronze tomorrow.”

This report by The Canadian Press was first published May 28, 2022.