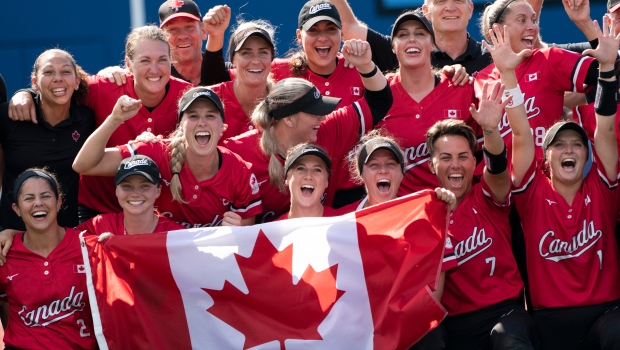 Canada’s women’s softball team pose for a photo with the Canadian flag after their win over Mexico in the bronze medal game at the Tokyo Olympics, Tuesday, July 27, 2021 in Yokohama, Japan. THE CANADIAN PRESS/Adrian Wyld

YOKOHAMA, Japan -- Danielle Lawrie was trying to console her crestfallen seven-year-old daughter over the phone.

Madison was in tears.

A heartbreaking loss to Japan hours earlier meant Canada's softball team wouldn't be coming home from the Tokyo Olympics with gold hanging from their necks.

"Honey, you're not guaranteed anything in sports," Lawrie, a veteran on one final ride with the national program, told the family's eldest. "You have the ability to get up and work hard.

"We can only control that."

The reliever and her teammates have been grinding for quite some time. Through disappointment, the heat, the pandemic, the not knowing if any of the countless hours, the blood and the sweat would matter in the end.

But when Lawrie sees Madison and her four-year-old sister, Audrey, at the airport later this week, she can show them all the sacrifice -- including 73 days apart -- was worth it.

The 34-year-old's fourth strikeout in 2 1/3 innings of work clinched Canada's 3-2 victory over Mexico in Tuesday's bronze-medal game to secure the country's first-ever spot on the Olympic softball podium.

"A conversation like that with a seven-year-old ... she may not know the magnitude of it now," Lawrie said. "But in the future, she will know that if my mom can do that, and do something that sets her heart on fire, why can't I?"

Kelsey Harshman drove in the go-ahead run on a sacrifice fly, while Emma Entzminger added two RBIs to secure third at Yokohama Baseball Stadium, some 13 years after Canada's agonizing fourth-place showing at the 2008 Beijing Games.

Four veterans from that team -- Lawrie, Jenn Salling, Lauren Regula and Kaleigh Rafter -- arrived at these Olympics looking for redemption.

They wanted gold, but bronze still put a smile on their faces.

"It means everything," said the 34-year-old Salling, who also announced she's retiring. "This is the best team and one of the best cultures I've ever been a part of. Personally, this is the best gift I could have ever received.

"I cannot put into words how much this ending means to me, and doing it with this group of women."

The United States and Japan were set to meet in the final later Tuesday.

Canada fell to the Olympic hosts in extra innings Sunday to end their gold-medal dream, but the 15 women dusted themselves off for a meaningless game Monday against Italy before hitting the field 24 hours later knowing they were still on the cusp of history.

"It's the resilience and the love and the selflessness that everyone shares," Salling said. "It's the coolest thing. We truly take care of each other.

"We genuinely love each other."

Lawrie, who called her husband the family's "MVP" for holding things down at home as she chased this goal, took a long break from softball to start a family. But the passion was still there, and she returned to the Canadian fold in 2017 with an eye on Tokyo.

"For the mamas out there that think they need to stop doing something because they have kids ... it's not easy to be away from your family," said the older sister of former Toronto Blue Jays infielder Brett Lawrie. "But what I've learned is if I'm not happy with what I'm doing, I'm not a great mom.

"It's made me realize that being able to do this and be a part of something bigger than myself, makes me an even better mama."

Lawrie said a friend sent her video of Madison jumping into dad's arms immediately after the final out -- way past bedtime.

Canada took a 2-0 lead in the bottom of the second on Entzminger's two-out single to left that scored Salling and Erika Polidori.

Mexico got one back in the top of the third and tied it two innings later before Lawrie came on in relief to stop the bleeding. The Canadians then pushed back in the bottom of the fifth when Harshman's sacrifice fly plated Janet Leung.

After allowing a lead-off single in the sixth, Lawrie was perfect from there in recording the final six outs in order and shouting, "I told you I got you!" as she was mobbed by teammates.

"We've been through some hard times," said the native of Langley, B.C., who now calls Seattle home. "That pandemic bettered us in a lot of ways. It made us have to dig deep into the hard stuff and figure out how we can be better.

"I look at this team and what we've done and been able to accomplish. There's three women I went to the Olympics with 13 years ago, and we're still grinding this out."

The top-ranked Americans, who finished a perfect 5-0 in the round-robin portion of this six-team tournament, won three straight gold medals beginning with softball's Olympic introduction in 1996 through 2004 before settling for silver in 2008 when Japan topped the podium.

Softball and baseball were dropped from the Games docket in 2012 and 2016, and won't be part of Paris 2024, but both are expected to be back four years later in Los Angeles.

"One of our themes, specific between the four (Beijing veterans) was about rewriting a story for not only ourselves and each other, but Canada," said Salling, who's from Port Coquitlam, B.C., and added she wants to coach her country at the 2028 Olympics. "We did that. We achieved that goal.

Conditions at the 34,046-seat venue in Yokohama on the west side of Tokyo Bay -- minus fans because of COVID-19 -- were more manageable than earlier in the tournament, feeling like 30 C with the humidity to go along with some rain after a string of sweltering days.

Canadian chef de mission Marnie McBean, on the 25th anniversary of her rowing triple gold, led the country's two-person cheering section, sitting directly behind home plate with a pair of flags and a drum.

What the Olympic champion witnessed is a drive and character Lawrie will never forget -- and hopes inspires the next generation, including her daughters.

"You have selfless-ass women that are putting themselves out there day in and day out for the betterment of the group for a hopeful moment," she said. "You're never guaranteed that. But you're guaranteed the grind, the hard, the stuff no one wants to do. And when you're willing to do that, you hope it works out.