Canada trending upward towards Tokyo, but race to podium crowded 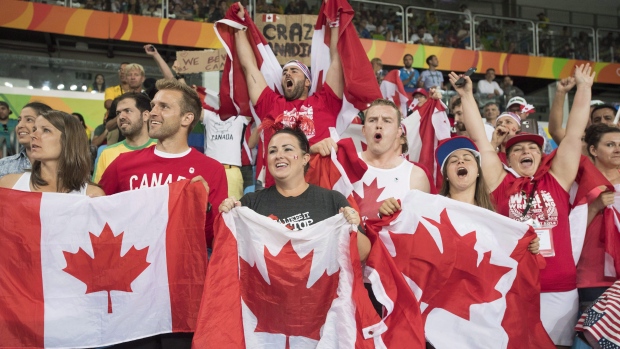 The good news for Canada's team heading to the 2020 Tokyo Olympics is it's capable of beating the 22 medals won four years ago in Rio de Janeiro.

The bad news is it's going to be really hard to do that.

Half a year out from the opening ceremonies July 24, Canada boasts medal potential in more sports than it did for Rio.

But summer-sport superpowers United States, China, Australia, host Japan, Britain and Russia are projected to gobble up huge chunks of the medal pie, leaving relative scraps for the rest.

“Our objective is to continually improve on our medal count,” Own The Podium chief executive officer Anne Merklinger told The Canadian Press on Friday.

“Always a stretch target for us. There's nothing more competitive and demanding and challenging than the Olympic Games. That hasn't changed going in Tokyo.”

Canada's 22 medals in Rio equalled the most at a non-boycotted Summer Olympics, matching Atlanta in 1996. Four gold medals were a decided improvement over a single gold in 2012 (Rosie MacLennan in trampoline, though another gold was awarded to Canadian weightlifter Christine Girard six years later).

Finishing 10th among countries in total medals was a small victory after years outside the top dozen, but Merklinger says that ranking was an anomaly.

In all other Summer Games since 2000 in Sydney, Australia, top 10 required 27 medals or more.

“The objective of improving on our medal ranking is very challenging given our analysis of what it took to be top 10,” Merklinger said. “If 27 is the threshold for every Games since 2000, that's pretty telling.”

OTP was established prior to the 2010 Winter Olympics and Paralympics in Vancouver and Whistler, B.C., to help get Canadian athletes on the podium at their own Games.

Track and field featuring star sprinter Andre De Grasse is a clear second, followed by a tier of sports including rowing, diving, cycling, canoe-kayak and wrestling.

Where Canada has medal potential it didn't in Rio is in women's artistic gymnastics, tennis and women's beach volleyball.

According to OTP, Canada has 21 more top-eight results - including eight more top fives - in the most recent world championships heading into Tokyo than Rio.

“If you're in the top five, you're within striking distance of the podium and it's really a question of what are the gaps that need to be addressed for those fourth and fifth finishes in 2019, so that they can covert to a medal performance in Tokyo,” Merklinger said.

A major difference between the 2004 Canadian team that brought home a dozen medals from Athens, Greece, and 2020 is in the increase in athletes with multi-medal potential.

There are more individual athletes capable of more than one medal, particularly in swimming, track and field and diving.

“That's where the magic happens where you've got multi-medal potential athletes across a number of different events,” Merklinger said.

But an international data analytics company is less bullish on Canada's podium prospects six months out from Tokyo than it was a year out.

That's down from 25 and six gold predicted last July, although Gracenote maintains Canada's rank of 13th in a virtual medal table.

A month out from Rio, Gracenote predicted 16 Canadian medals including three gold.

Vincent Lapointe has yet to be cleared of a doping violation to compete in Tokyo, however.

No individual swimming medals predicted for Oleksiak, but three relay bronze is reckoned for her. Gracenote projects a bronze in the 200 metres for De Grasse.

Six Canadian teams have qualified so far, which is the most for a non-boycotted, non-hosted Summer Olympics. Canada had nine teams compete in Montreal in 1976.

Following the Aug. 9 close of the Olympic Games are the Paralympic Games from Aug. 25 to Sept. 6.

Medals are expected to come from swimming, cycling and track and field in Tokyo.

“Our key message around the Paralympics is we're about in the same position heading into Tokyo as we were heading into Rio,” Merklinger said.

“The objective is to again surpass our medal achievement in Tokyo compared to what we did in Rio.

“That is even a bigger stretch goal because of the shallow pool of athletes that we have with medal potential in the country right now.”