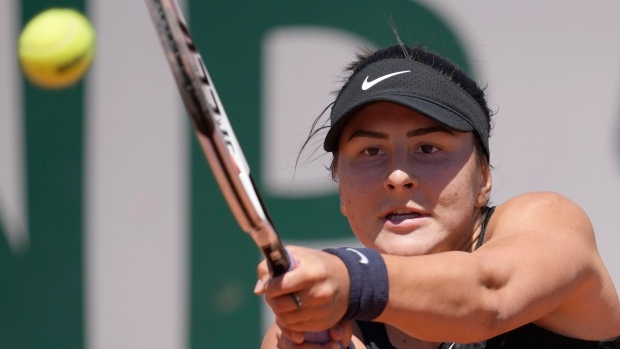 Canada's Bianca Andreescu plays a return to Slovenia's Tamara Zidansek during their first round match on day two of the French Open tennis tournament at Roland Garros in Paris, France, Monday, May 31, 2021. (AP Photo/Christophe Ena)

EASTBOURNE, United Kingdom - Canada's Bianca Andreescu is heading to the second round of the Viking International.

The third-seeded Andreescu, from Mississauga, Ont., beat American Christine McHale 6-4, 2-6, 6-2 in the first round of the WTA Tour 500 grass-court tournament on Tuesday.

Andreescu won 68 per cent of points when she got her first serve in against the 96th-ranked McHale and saved four of eight break points.

It was the seventh-ranked Andreescu's first win in her past three tournaments.

The Canadian will face Anett Kontaveit of Estonia in the second round of the Wimbledon tune-up event.

Pospisil had nine aces and won 91 per cent of first-serve points while saving the only break point he faced. He broke Ward once on three chances.

Pospisil will face sixth-seed Alejandro Davidovich Fokina of Spain in the second round.